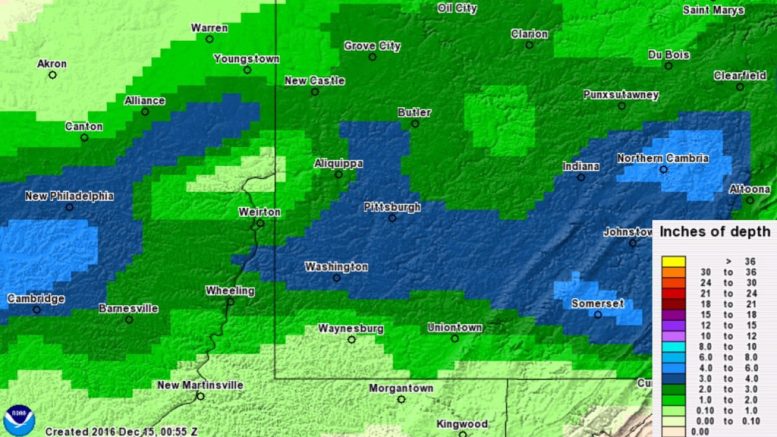 On Tuesday, December 13th, Pittsburgh picked up 3.8″ of snow in the area’s first big event of the winter. All of the forecasters we track underestimated the total snowfall, with some missing the actual accumulation by several inches. This west-to-east system produced a wet, heavy snow that piled up quickly and created a messy evening commute.

Interestingly, Allegheny County recorded the highest snowfall totals, which is rare: typically counties to the north or south of Pittsburgh see the biggest accumulation amounts. Officially, we are adding this storm to our Winter Archive as 3.8″ of snow, with 11 school closings/delays this morning (Wednesday) due to lingering effects.

Below is our forecast analysis for each media outlet that we track. This year, we are changing our Accuracy Score system from a 1-10 scale to a traditional A-F grading scale. We hope that this system will be more lenient than the 1-10 scale, and that the scores will more accurately reflect forecast performance. At the end of each month, we will update our Forecaster Ratings to include the new Accuracy Scores. 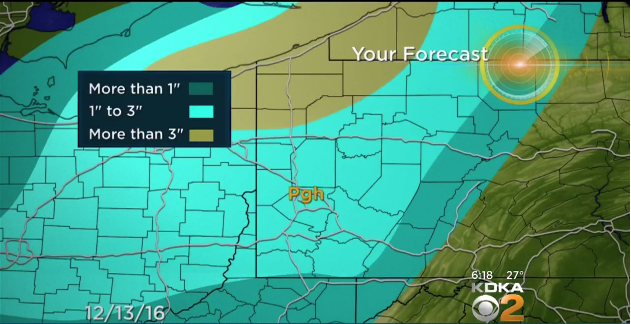 KDKA: Aside from being one of the weirder snow maps we have ever seen (why are the ranges “more than 1 inch” then “1 to 3 inches”?), CBS Pittsburgh was one of the most accurate forecasters for this snowstorm. By making their range 1-3″ and not 1-2″, they had a higher ceiling than almost any other outlet. However, Pittsburgh received almost an inch more than forecast, so their prediction was not perfect. Accuracy Score: B 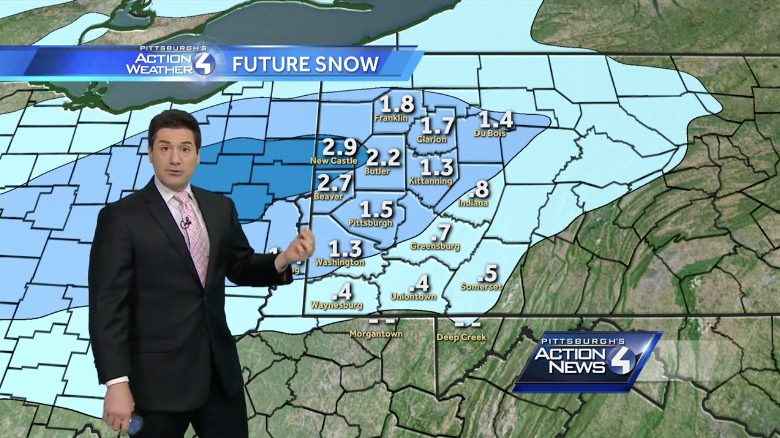 WTAE uses a FutureCast model for predicting snowfall, which gives an exact numeric prediction, down to the decimal point. While this model was the most accurate model we tracked in 2014-15, it had some issues last winter. It is off to a bad start this season, predicting an inch and a half for a storm that dumper nearly four inches. They do deserve some credit for giving an exact amount instead of a range, but unfortunately they did not forecast the correct location of the highest snow totals. Accuracy Score: D 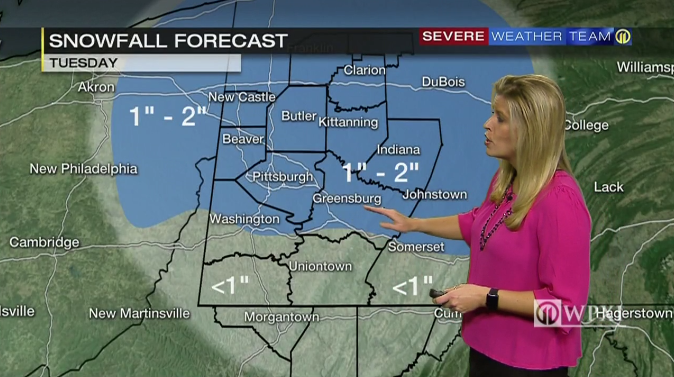 WPXI’s snow map is what we imagine WTAE’s would have looked like if they used a range instead of exact figures. Thus, they have the same problems: accumulations were too low, and the highest snow amounts were too far north. Accuracy Score: D

AccuWeather did not publish a snow map, and so it is hard to judge anything but their 1-2″ range. Seeing as Pittsburgh got nearly 4 inches, their forecast wasn’t the best. Accuracy Score: D 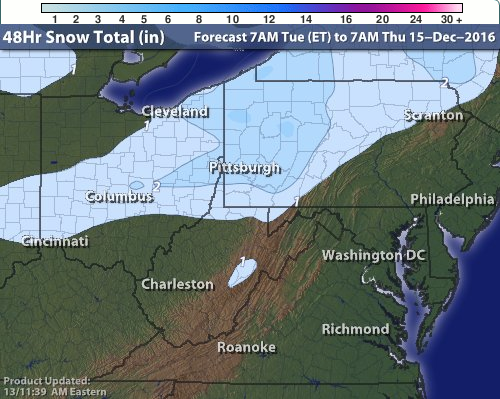 Intellicast has long been one of our favorite forecasting models, and although they also undershot the actual accumulation, they were closer than others. Their placement of 2-3″ instead of 1-2″ makes them on par with KDKA, and thus an Accuracy Score of C. 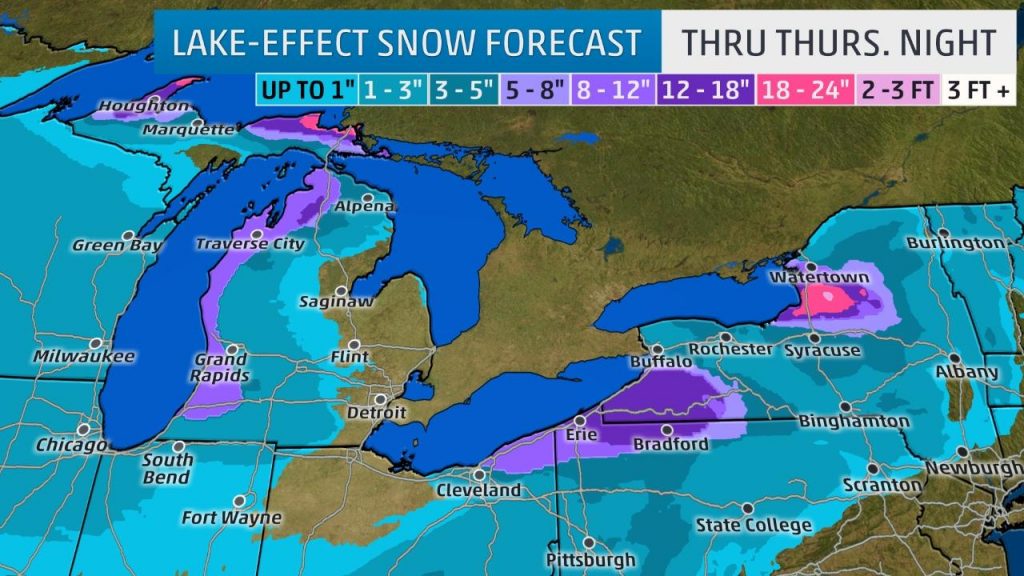 The Weather Channel did not publish a snow map specific to Tuesday’s snowfall. Their map includes accumulation from the lake effect Wednesday and Thursday, and thus we cannot assign an accuracy score yet. Since Pittsburgh has already exceeded the 1-3″ range, it will only become more incorrect as the light accumulation adds on through Thursday night. We will return on Friday to update this post with a special Accuracy Score including the additional accumulation from the next few days. 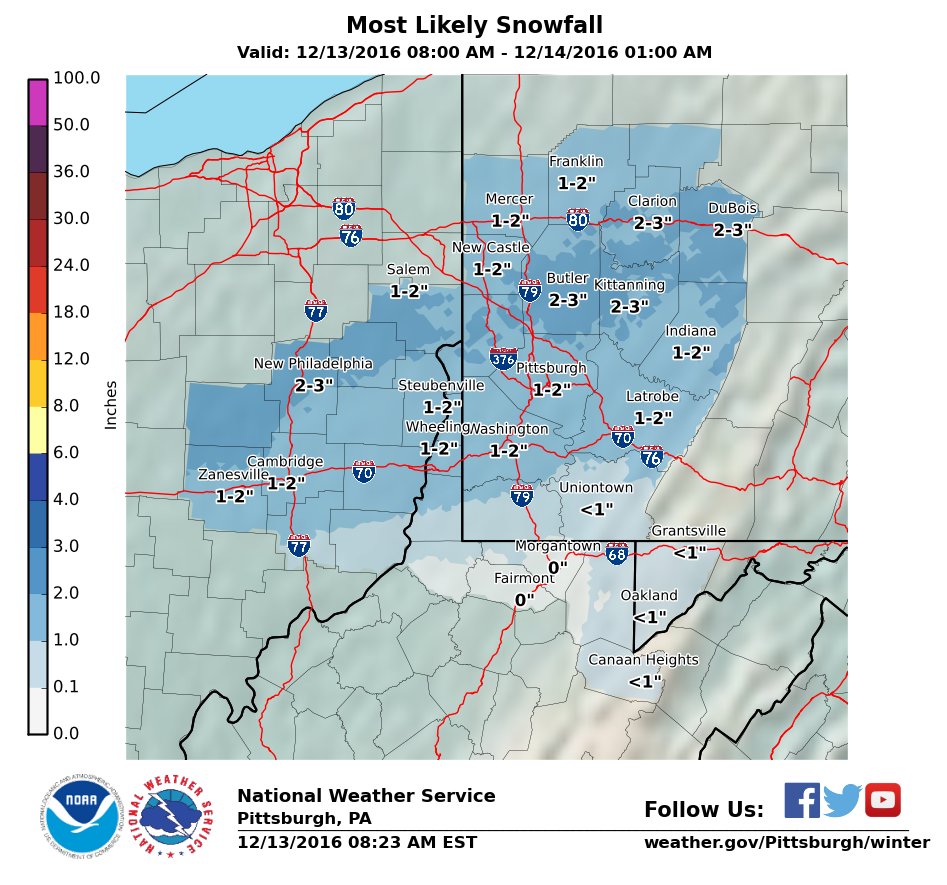 The National Weather Service, Pittsburgh Office matched WTAE and WPXI’s snow maps. They did increase their forecast from 1-2″ to 3-4″ by 1pm, but that was after the snow had already accumulated an inch. Our Forecast Roundup took the latest forecasts as of 11am Tuesday. Accuracy Score: D 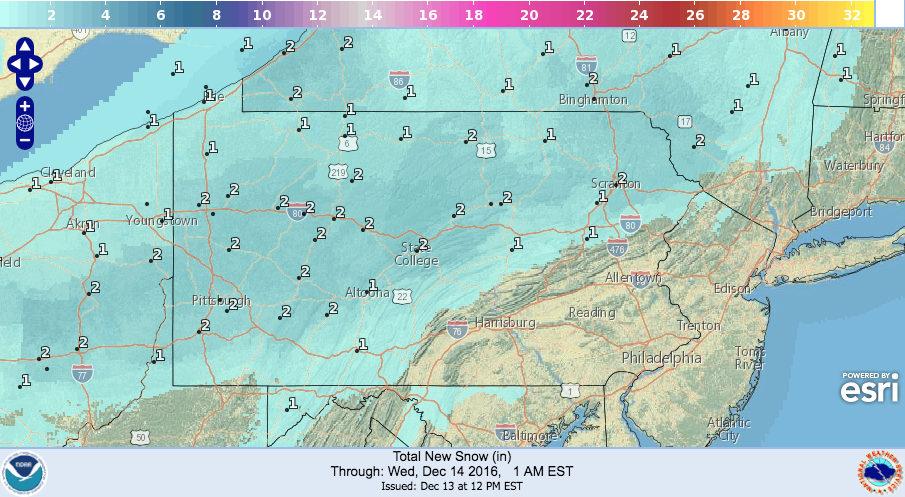 Be the first to comment on "Forecast Analysis for Dec. 13th snowfall"