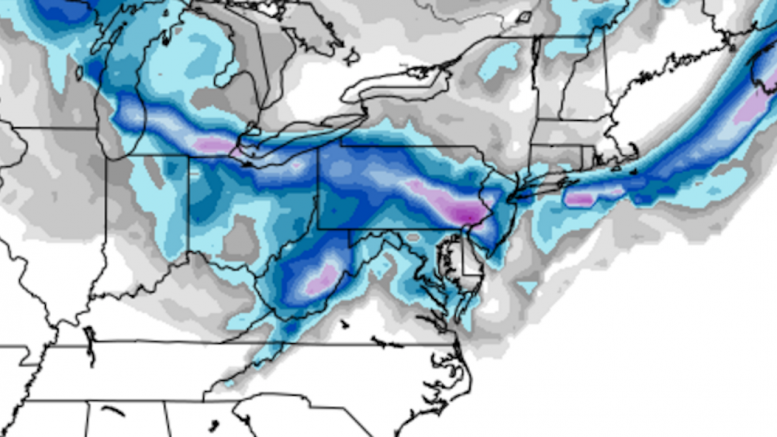 Well folks, winter is not over yet. Despite a very mild March, April has started off cold and wet. We will experience a moderate snow event tonight through Sunday, with the majority of the accumulation coming early tomorrow morning. This system will be very concentrated and the heaviest snowfall rates will only impact a narrow band of areas, so forecasting exact amounts is difficult. Many of the recent forecasts called for anywhere between 1″ and 8″ across Western Pennsylvania, with the highest totals north, east, and south of Allegheny County, which has been a typical distribution this winter. However, it is important to emphasize that with such narrow areas of heavy snowfall, a minor shift in any direction of just a few miles can drastically change what actual snowfall amounts will be. As we have done for every snowfall this winter, below are the snowfall forecasts from all the local news stations as well as the big national ones. We have kept track of these forecasts since December, and have assigned “accuracy scores” based on the success of the forecast. If you’re looking for a specific forecast from the many below to trust, The Weather Channel has the highest accuracy score, with Intellicast just a few ticks behind. After the last flake falls this weekend, we’ll revisit this post and publish a Forecast Analysis where the scores are assigned, and it might just be our last analysis of the 2015-16 winter season. 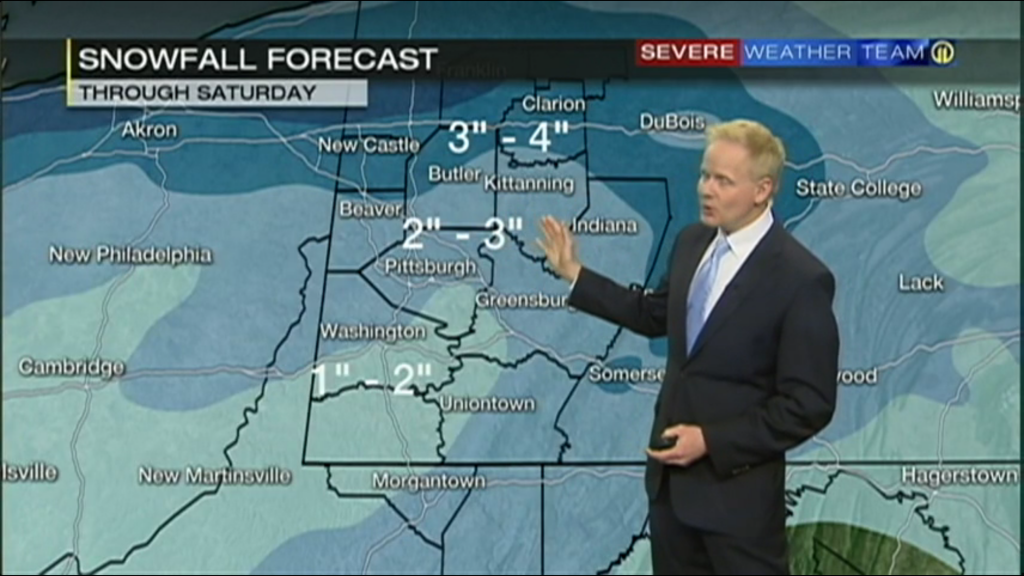 WPXI is one of the outlets that upped their snow forecast, specifically for Allegheny County. Their 1-2″ zone has been bumped considerably to the south, putting all except the extreme southeastern corner of the county in 2-3″. It is also worth noting that this map keeps that 2-3″ range all the way done the ridges, suggesting elevation will not enhance this storm in the Laurels. Highest totals are found from New Castle north, where a 3-4″ then 4″+ zone is applied. 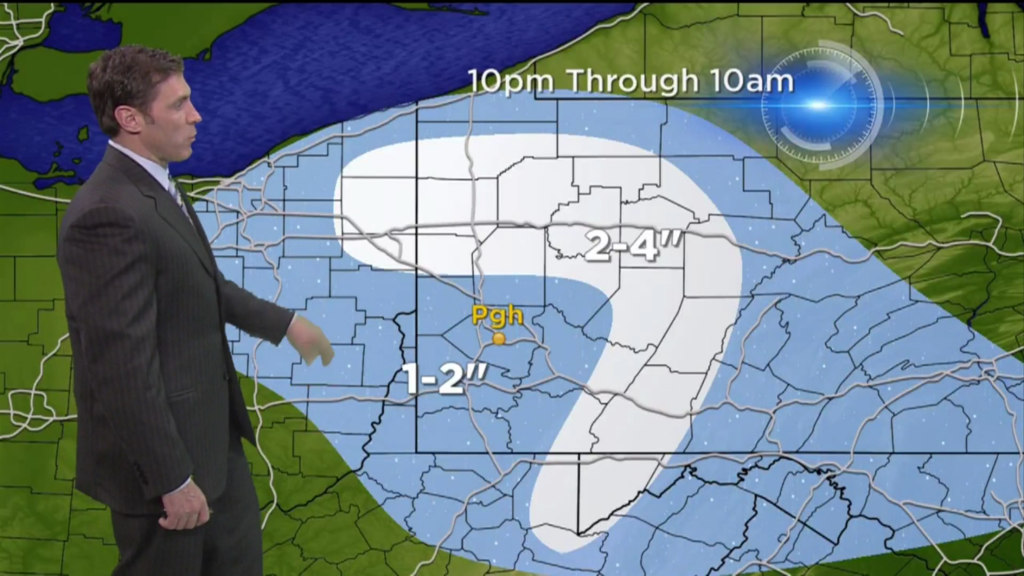 KDKA uses a similar shape accumulation distribution as WPXI, but they are more conservative with their estimates. Their map maxes out at 4″, which is north of Cranberry and comes down through the ridges. The most interesting part of this map to us at PGH Snow Day is the very sharp cutoff before Erie where the 2-4″ range gives way to the 1-2″, a stark contrast to the 4″+ zone WPXI has there. 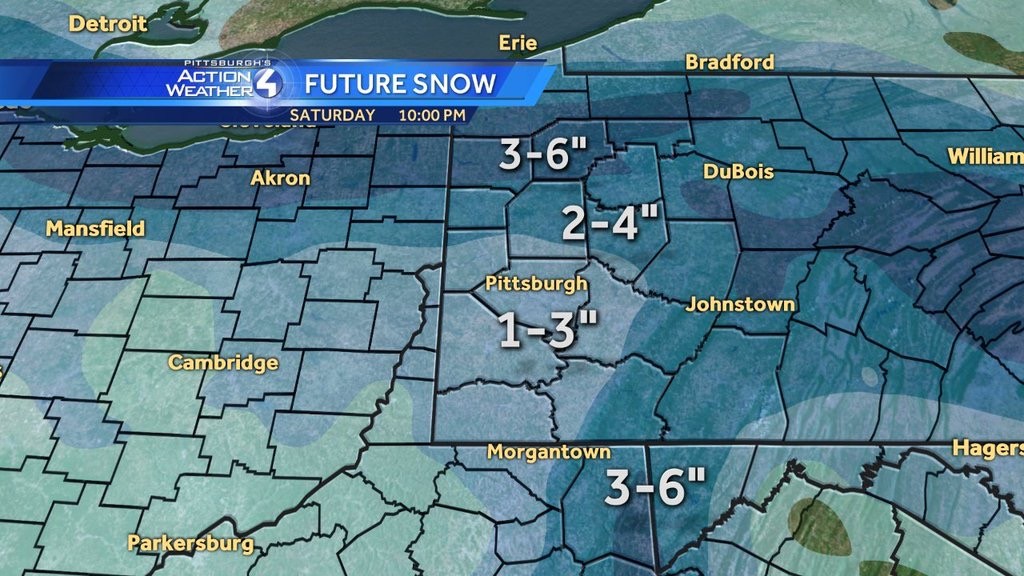 WTAE deserves some credit for their consistency in their forecast. Allegheny County has been in a 1-3″ range for a few days. They have some of the highest predictions for the storm, placing a 3-6″ range from around New Castle on north. Like KDKA, they have a sharp northern cutoff going from that 6″ back to 2-4″ in just a few miles, but they are less drastic in their predictions for around Erie. Also, if you look at the Laurel Ridges, WTAE sees heavier totals in the higher elevations. 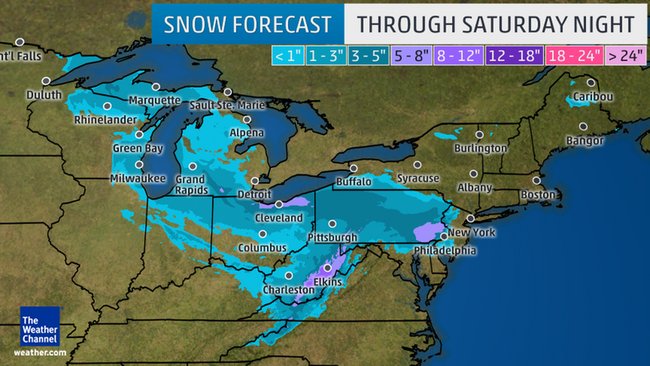 The Weather Channel has been one of the most accurate forecasting groups for Western PA this winter, and they have an interesting generic map for this system. From the city of Pittsburg north, it is a very clear 3-5″ range all the way to Erie. From the city on south, it is 1-3″, with scattered 5-8″ amounts in the Laurel Ridges. 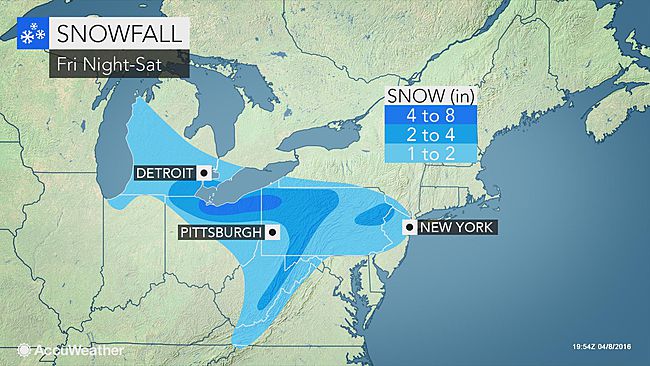 AccuWeather pulled one of the few perfect scores with a storm a this winter. They have a unique map for this system, keeping a conservative KDKA-like 1-2″ range from just north of the city on south, then very high amounts to the north. Cranberry north is in a 2-4″ range, then that quickly changes to 4-8″, the highest total shown on any map for those locations. This map closely trusts to recent runs of the GFS model, so we’ll see if that trust pans out. 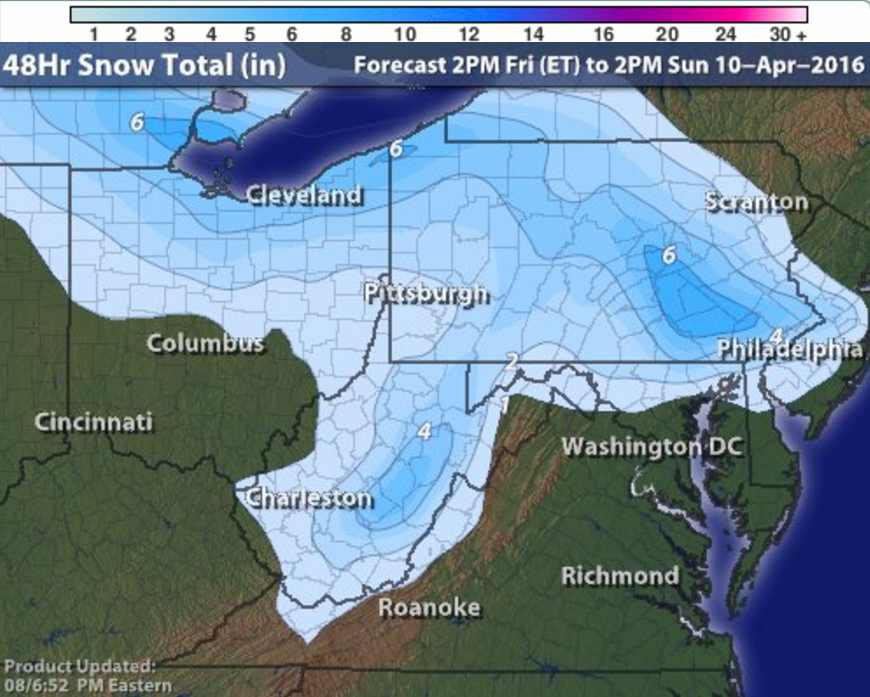 The Intellicast model is one of our favorites at PGH Snow Day, and it has bad news for Pittsburgh snow lovers. Almost all of Allegheny County is limited to a 1-2″ range, with higher 2-5″ amounts to the north. Like other maps, it does not put higher totals in the Laurel Ridges. 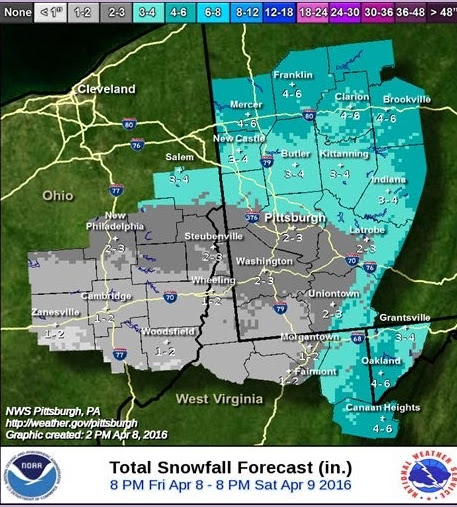 The National Weather Service Pittsburgh Office is another one of the agencies that upped their forecast amounts today, putting the 2-3″ and 3-4″ boundary right through the city. All of Allegheny County will see at least 2″ according to this map. North and east of the county has 3-4″ then 4-6″ ranges, with that 6 being the highest total anywhere on the map. 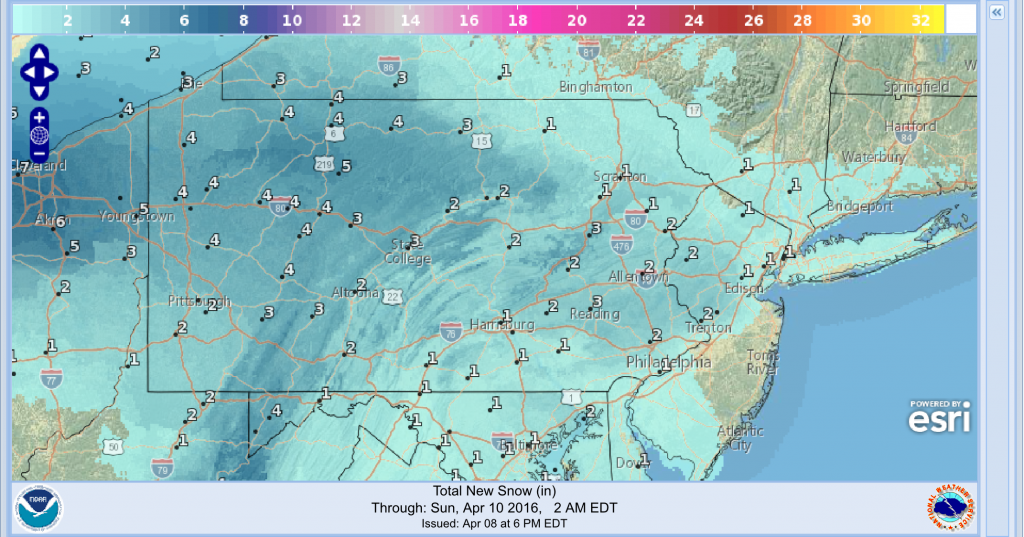 The NWS Digital Map from digital.weather.gov visualizes forecast data from the various NWS offices, such as from the map above. It has smaller numbers than the PBZ NWS map above, keeping the highest total limited to 4″.