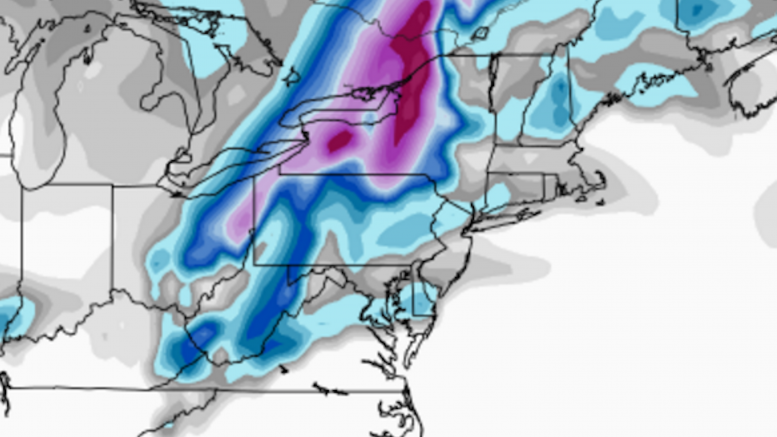 This winter has been short on snow, but certainly not short on drama. Once again, a highly complex system will bear down on the Mid-Atlantic and Northeast, making for very tricky forecasts. Monday night through Tuesday will be the first time this winter that a “mixing” storm will impact Western Pennsylvania, as frigid cold from this weekend is pushed out by strong southern warmth. On top of the troubles that come with a wintry mix hampering snow totals, we once again have a storm where a literal mile makes a huge difference. Both the GFS and NAM models show less than a 25 mile gap between no accumulation (all rain) and upwards of a foot. This system will be a great test of the many different agencies, as the vast number of variables has led to a vast number of differences in the forecasts.

Each predicted measurable snow event will have a roundup article like this one posted, so that you can view each network’s predictions for the storm. After the last flake has fallen, we will post an article inspecting who had the most (and least) accurate snowfall forecast in our Forecast Analysis. If you are looking for a specific map to trust for this complex weather event, WTAE has been most accurate so far this winter, with Intellicast not far behind on our Accuracy Score rankings. 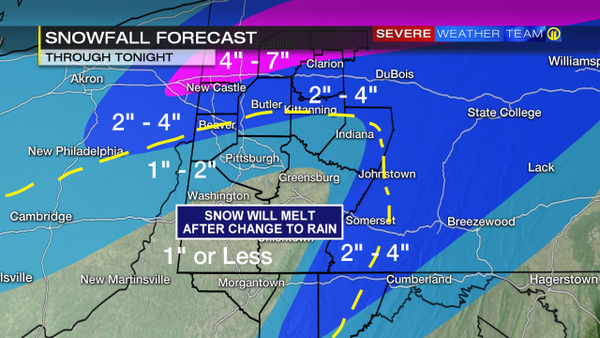 WPXI is calling for no more than 7″ across the board, with those heavier totals of greater than 4″ happening in extreme northern PA. On their map, the top half of Allegheny County will see 1-2″, with the bottom half getting less than an inch. From just north of Allegheny County on south, then from the Laurel Ridges on west, they predict all snow accumulation will be washed away by rain overnight. They are not predicting ice within the dashed yellow line. 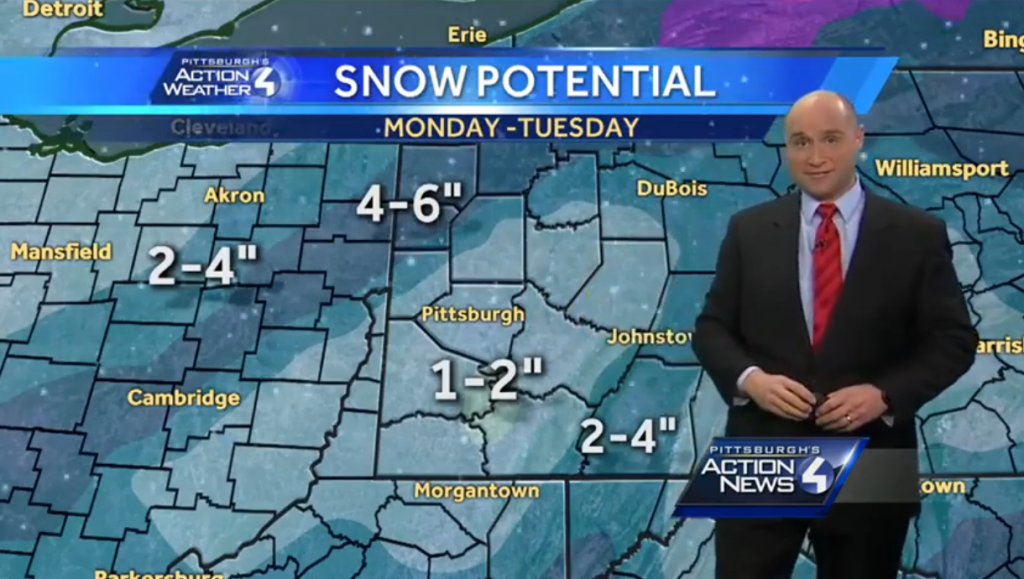 WTAE also believes in the “snow hole” over much of Western PA, with areas to the north, south, east, and west of Pittsburgh ranging from 2-6 inches of accumulation. They, like WPXI, do not believe in high snow totals of 8″+ north of the city. Pittsburgh is expected to get just an inch or two on this map. 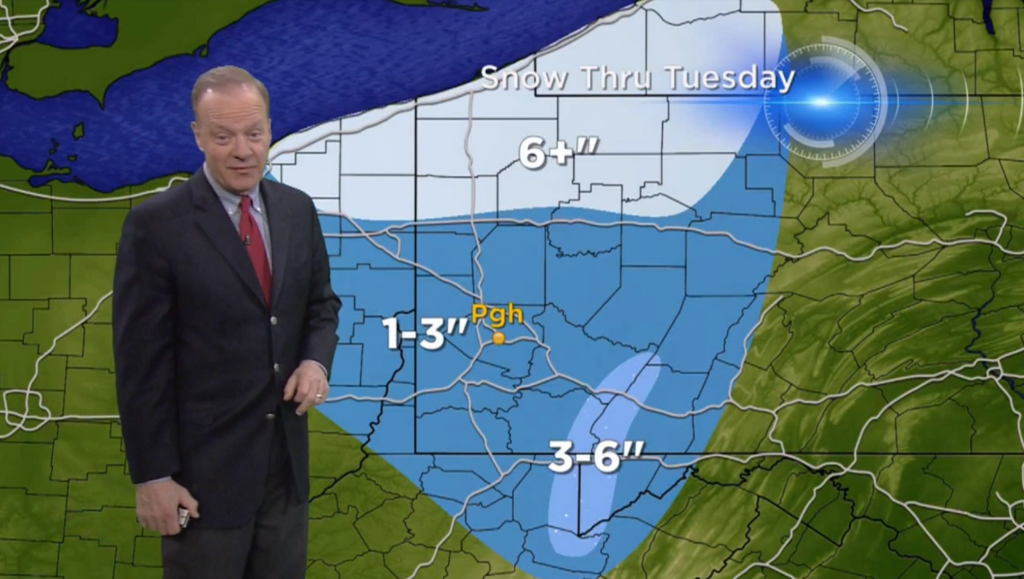 KDKA does not include the “snow hole” on their map, instead favoring three ranges of snowfall. Areas from Grove City on north are getting a 6+ inch forecast, which allows for the 8″ or higher totals many models are predicting. Nearly every other county on their map falls under a 1-3″ forecast, except for an extremely thin area of the Laurel Ridges, where a Winter Storm Warning is in place, that predicts 3-6 inches. 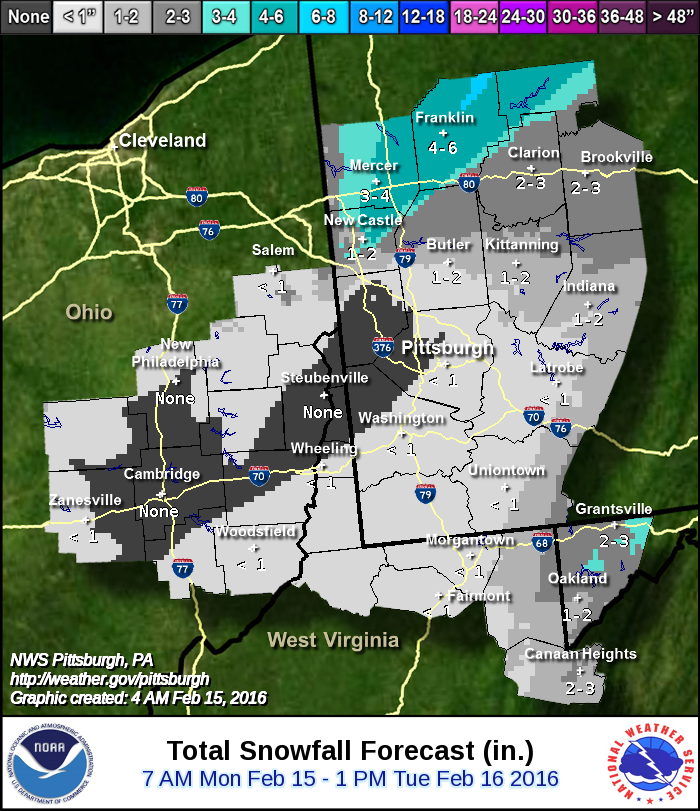 The Pittsburgh Office of the National Weather Service has not believed in widespread snow since forecasts of the storm began. Their snowmap is radically different than many others, in that they have a last portion of western Allegheny County recording no snow at all. This is significant, because it includes Moon Township, where the official Pittsburgh total for snowfall is recorded. Just a few miles north, however, the accumulation gradient quickly changes from 1-2″, to 2-4″, to 4-6″. Most of their forecast zone is not forecast to see an inch of snow. 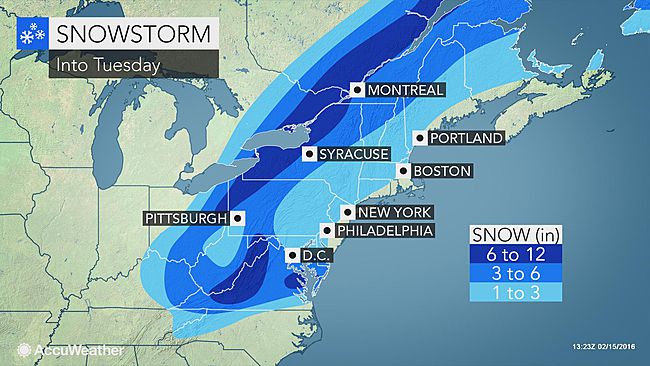 AccuWeather is a big believer in the “snow hole,” an area of low accumulation in Western PA. The big difference on this map is that the hole is located further south than on others, putting Pittsburgh on a split between 1-3″ and 3-6″. They do not see higher accumulation amounts in the ridges, instead keeping a 3-6″ area over almost all of Western PA. The higher 6-12″ range is present on this map, from just south of Erie to just north of Grove City. 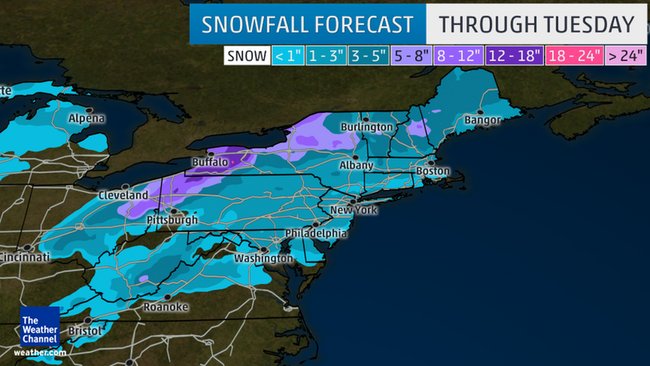 The Weather Channel has drastically changed their map since they first published it on Thursday. Pittsburgh was initially forecast for 5-8″ on their first map, but now they are barely within a less than 1″ range. The Weather Channel is aggressive with their “snow hole,” believing that absolutely no snow will fall from Pittsburgh on south. They do forecast a higher 3-5″ range in the ridges, and even higher 8-12″ and 12-18″ spots in northern PA. 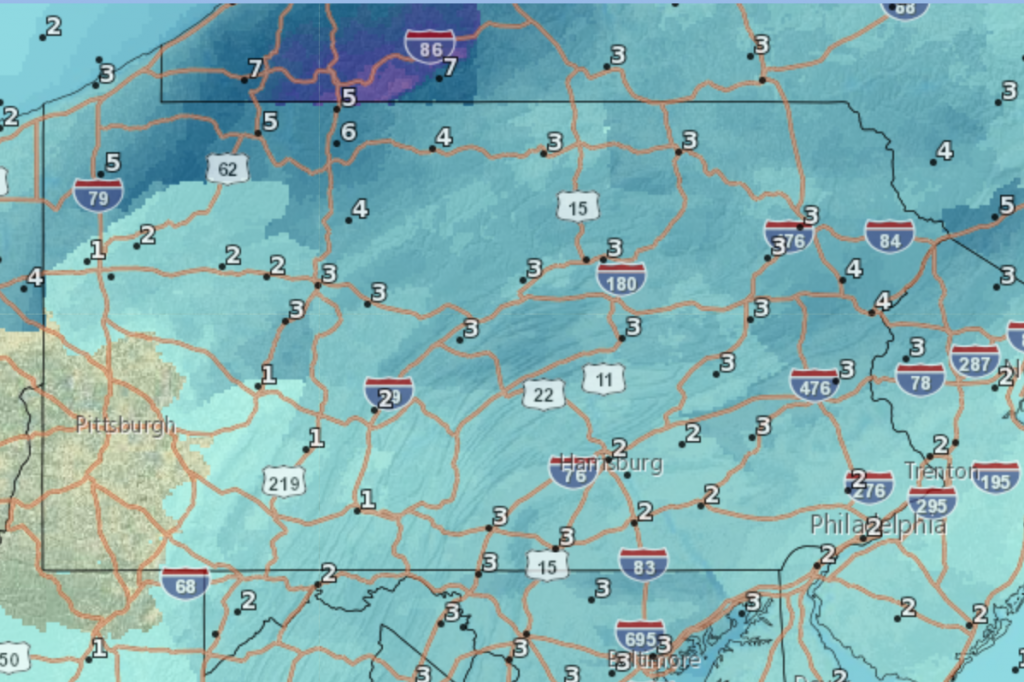 The NWS Digital page follows the same approach as the Weather Channel, forecasting that no flakes fly in the “snow hole” zone south of Pittsburgh. This map has significantly lower totals than the others on this page, with 5″ being the maximum. Pittsburgh, and all of Allegheny County for that matter, are snowless per this map. 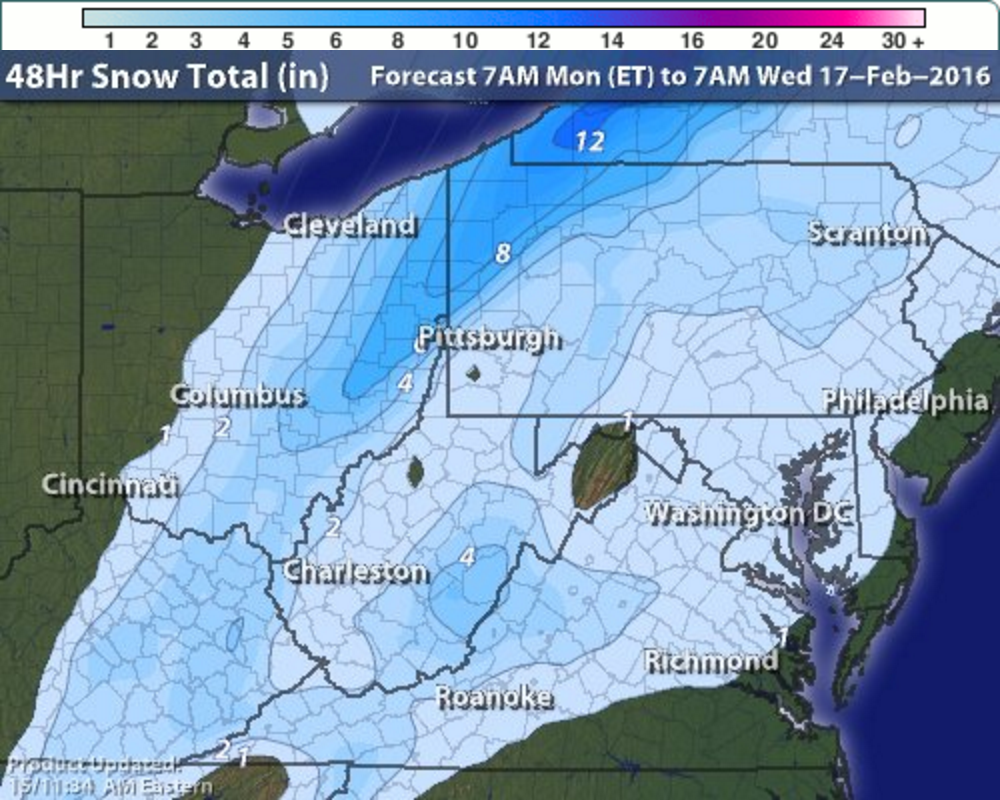 Intellicast has historically been one of the most reliable weather forecasts we track, and their map for this system looks believable. The “snow hole” is evident, but only a very tiny spot in Washington County is held without any measurable snow on their map. As expected, extremely tight gradients ranging from 2″ to 8″+ spread out less than 50 miles from Pittsburgh. All of Allegheny County can expect to see 2″ or less on this map.