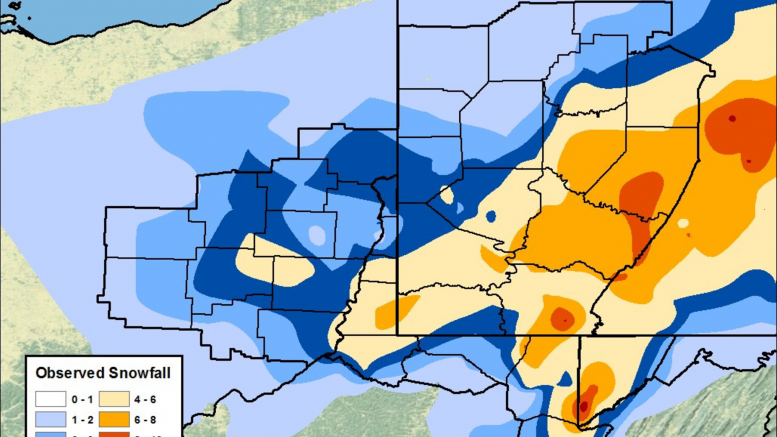 On February 8th, we published a roundup of forecasts for the snowstorm coming later that evening. As expected, the system produced a moderate accumulation that plagued Feb. 10th’s morning commute, leading to hundreds of school delays and closings. The National Weather Service’s Pittsburgh office measured 5.2″ as their storm total snowfall, and that is the measurement that will go down as the official number.

As always, our forecast analysis includes accuracy scores, which are based on a traditional A-F scale. At the end of the winter, each outlet’s accuracy scores are added up and averaged into their overall Forecaster Rating. 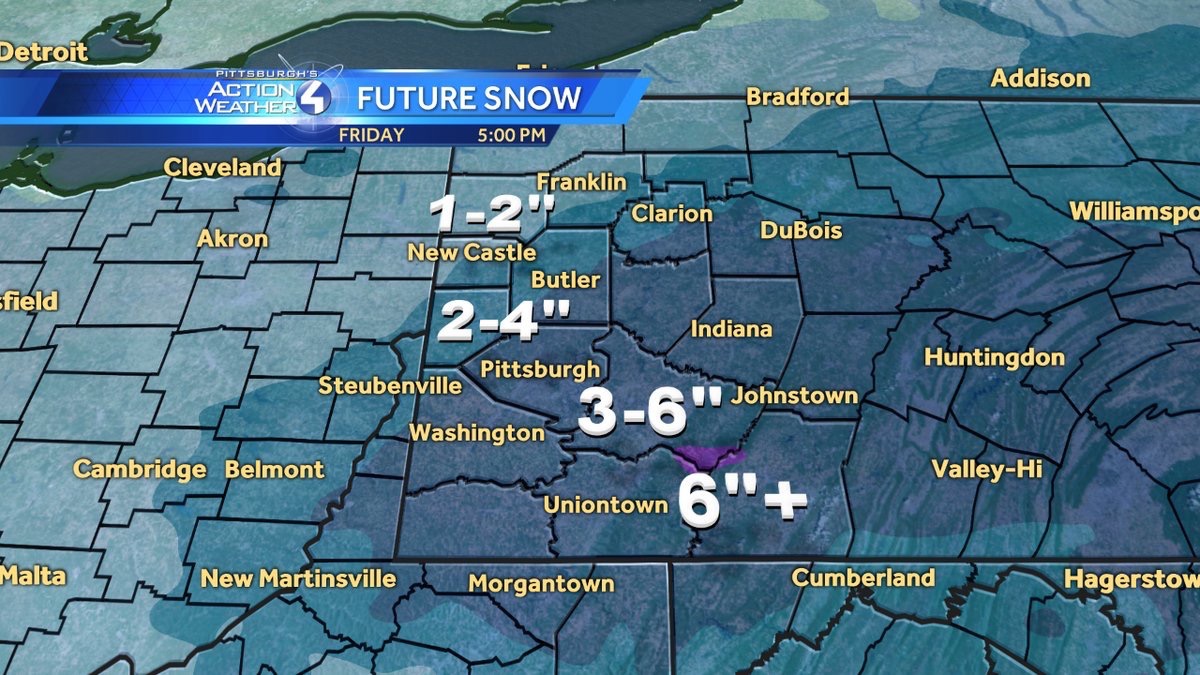 WTAE’s snow map was pretty much perfect in Allegheny County, with some problems under-forecasting accumulation east of there. There are no conflicts between snowfall reports and the 3-6″ forecast in the county. The only significant failure of this map was to forecast the 6-10″ observed in Armstrong, Indiana, and Westmoreland counties. Accuracy Score: A 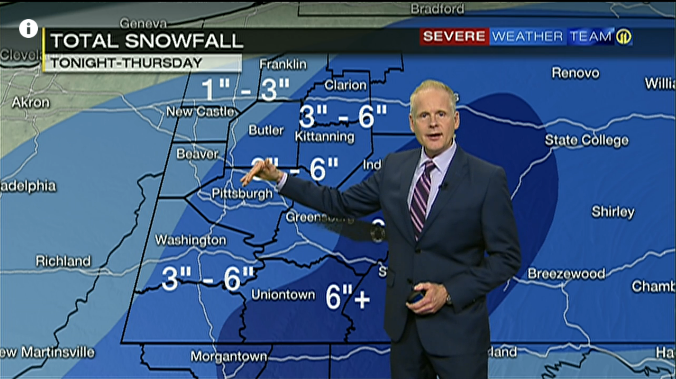 WPXI had a very similar map to WTAE, with the exception being their one 1-3″ range rather than a 1-2 and 2-4 combo. Their decision to go with a 6+” range through all of the dark blue shading ended up being the right call. Accuracy Score: A 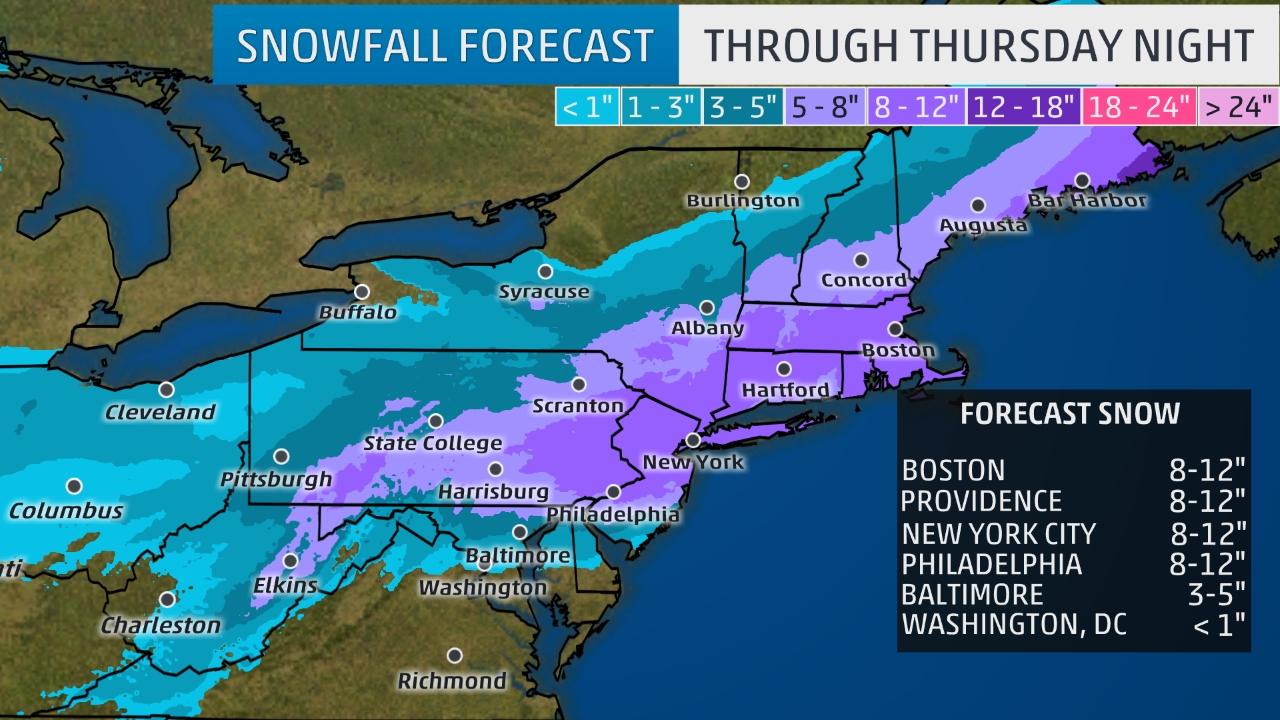 The Weather Channel’s map was also pretty good. Their 3-5″ range through Allegheny County was not entirely accurate as some areas, including the official measurement location in Moon Township, pushed 6″. Just south and east of Allegheny County also saw totals higher than 5″, but this map’s inclusion of an 8-12″ range in the ridges was a smart decision, as one ski resort reported 11″ total. Accuracy Score: B 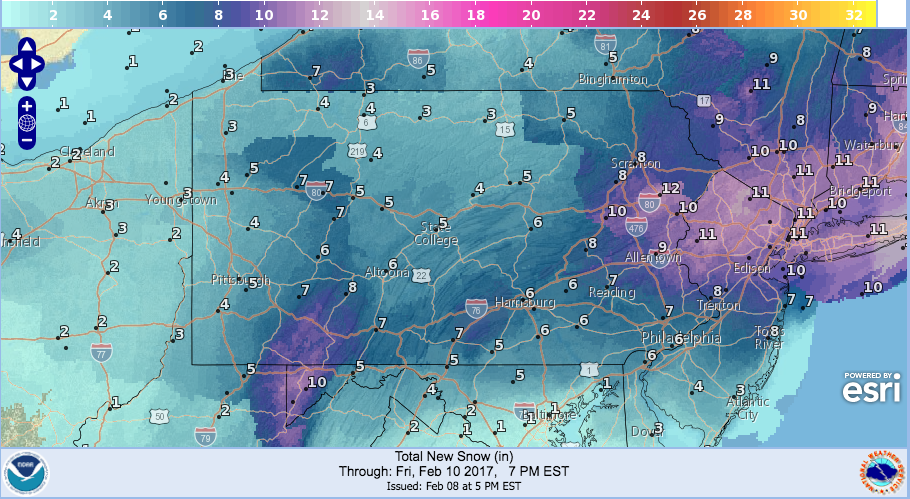 The NWS Digital Forecast Map was spot on. In fact, the forecast totals placed on this map in Western Pennsylvania are good enough to be used as the official accumulation numbers. It correctly forecast the 5″ in Allegheny County, the 7″ just east of there, and the heavier 10″+ in the ridges. Accuracy Score: A 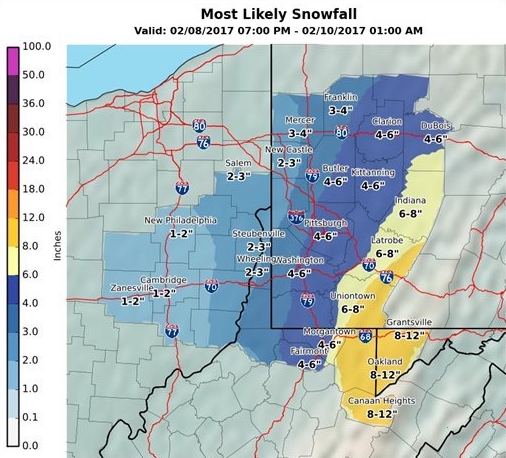 The Pittsburgh Office of the National Weather Service aligns pretty well with the NWS Digital Map, and thus gets the same thumbs-up. The major issue with this map was the cutoff between 4-6″ and 3-4″ right through Allegheny County, which doesn’t match up with the 5.2″ they measured in Moon. Accuracy Score: B 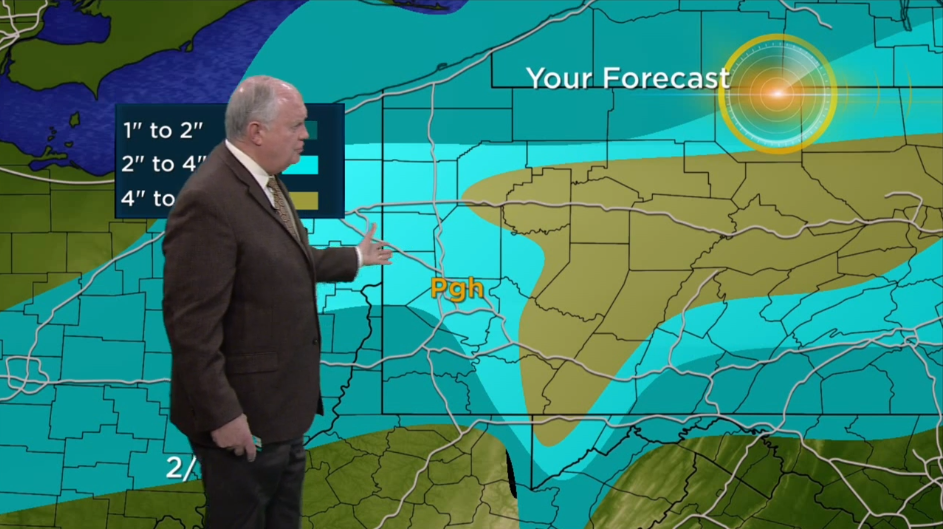 KDKA’s forecast map did not work out in a lot of ways. Their 2-4″ prediction for Allegheny County was too low, as 6″ totals were reported. In addition, their 4-8″ range failed to account for the double-digit totals seen in the Laurel Ridges. Also, their 1-2″ range in the southwest was way off; for example, a 6″ measurement was taken in Greene County. Accuracy Score: C 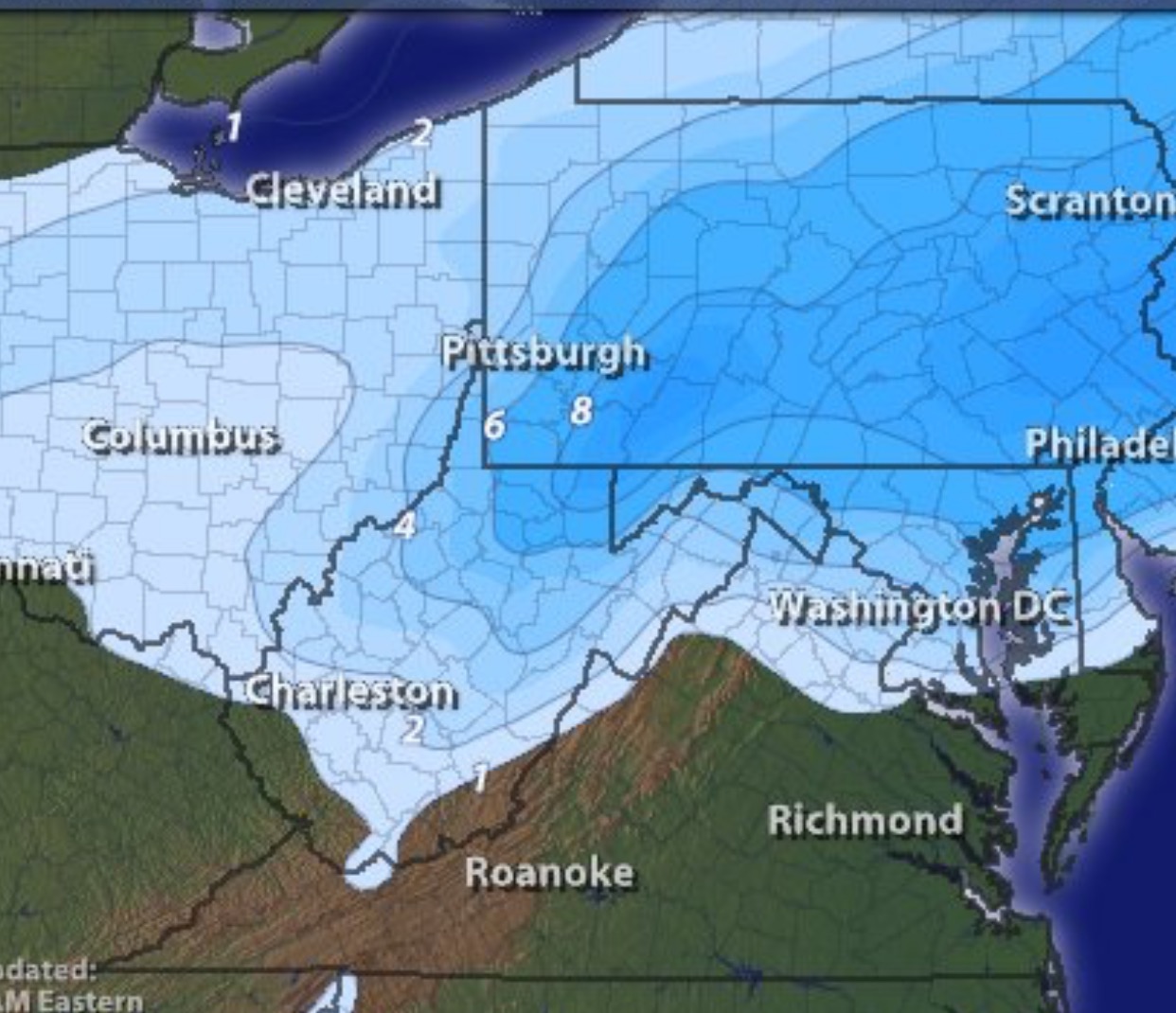 Intellicast had a really, really good forecast map. They did overshoot a little bit just north of Allegheny County, but everywhere else was pretty much spot on. The 8″+ range in the Laurels was accurate, and their placement of the border between 4-6″ and 6-8″ in A.C. was perfect. Accuracy Score: A 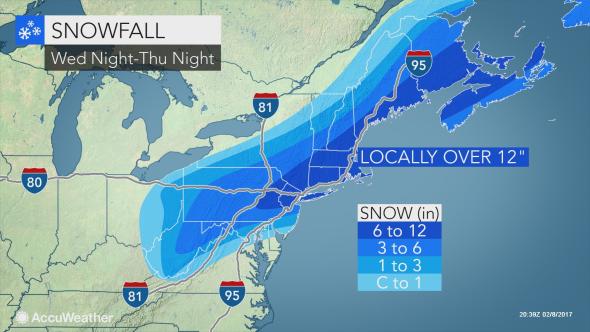 AccuWeather had some problems undershooting in Western Pennsylvania. The maximum accumulation they forecast in our area was 6″, when in the end areas saw double digits. Also, their 1-3″ range, which went from Pittsburgh on west, failed to match the 5″ measured near the airport. South of Allegheny County this map works, but once you move east into the ridges it falls apart. Accuracy Score: C

Be the first to comment on "Forecast Analysis for Feb. 8-9 snowstorm"