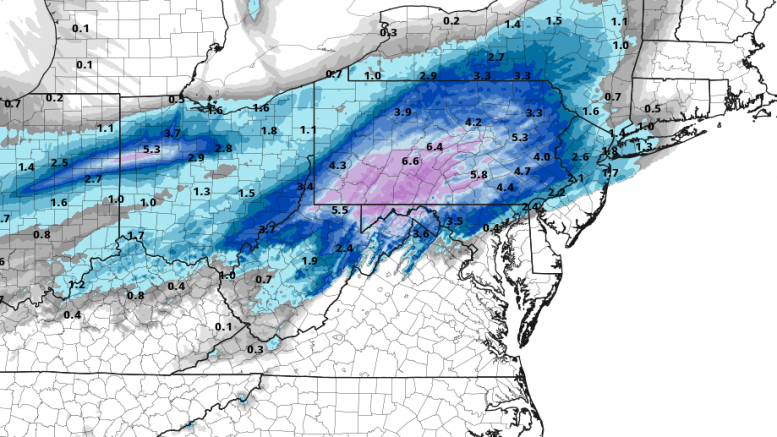 This morning, forecasters on the local channels KDKA, WTAE, and WPXI were all calling for little snow accumulation from tonight’s system. Now, those forecasts have evolved into a significant snow event, worthy of a Winter Weather Advisory. In this post we’ll take a look at how the forecasts changed from 9am this morning, to 3pm this afternoon.

WTAE had one of the higher forecasts this morning, so they had less adjusting to do than other outlets for their evening forecast. This morning, Ashley Dougherty was calling for 2-4″ in almost all of Allegheny County, with just a tiny pocket of 3-6″ in the Laurels. Interestingly, this pocket of heavy accumulation actually got smaller in their evening re-draw, but the range was upped to 6″+. The 2-4″ range shifted to the northwest, and all of Allegheny County was placed under the 3-6″ range.

WPXI had a pretty big shift in their maps from morning to evening. Scott Harbaugh was forecasting 1-3″ for much of the forecast region this morning, but by evening Stephen Cropper had widely expanded the 3-6″ range. All but the extreme western point of Allegheny County is under the 3-6″ range, while the Laurels have been placed under a 6+” range. All in all, the ranges on WPXI’s map did not change, but the size of these areas was widely expanded.

The Pittsburgh Office of the National Weather Service made significant changes to their forecast between early morning and early evening. All of Allegheny County was forecast to see 2-3″, but in their revised predictions much of the county moved into a 4-6″ range. However, their cutoff for this boundary is near the city, so western suburbs like Moon are forecast to see 3-4″. Areas east of the city have been bumped up from 3-4″ to 6-8″.

Be the first to comment on "The Evolution of a Forecast: How tonight’s snow went from nothing to 6″"