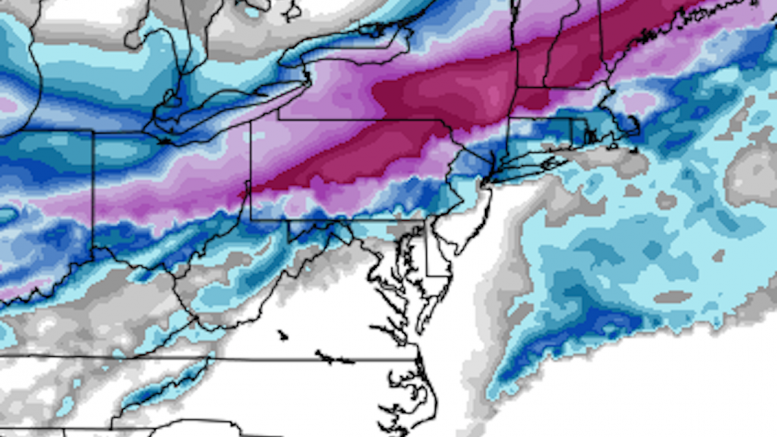 UPDATE 1/19/19 9:35 AM: Roundup has been updated to reflect forecast changes since last night. The majority of models now expect the rain/snow line to creep north of Allegheny County, limiting today’s snow totals. However, the storm is now moving slower than expected, allowing the nighttime cold air to produce more overnight snow than originally forecast.

The last time Pittsburgh recorded more than a foot of snow was Snowmaggedon in February 2010, where the region saw more than 20 inches. While this weekend’s storm is not expected to be as historic in terms of total accumulation, it certainly will be remembered for its degree of forecast difficulty. As a word of caution, it is worth remembering that the forecasts the night before Snowmaggedon were largely calling for 6-12″ in Pittsburgh, missing what actually happened by nearly a foot.

Interestingly, rain/sleet mixing was a concern in terms of limiting accumulation, just as that is a major factor in this storm’s forecast.

new thermal profiles suggest it’s possible a period of sleet/rain could occur south of alleg county in the P.M.

As has been talked about for days, the most difficult part of this forecast is where the rain/snow line sets up; the extent to which this line moves north will be the difference between a foot or an inch of snow. It is remarkable how uncertain the forecasts remain at this time, only about 12 hours from the first flakes falling.  Given the lack of consensus among the computer models in determining the location of this dividing line, the forecast in Allegheny County is next to impossible. The Pittsburgh office of the National Weather Service explained how important a few miles will be in their latest Forecast Discussion:

***OVERALL MESSAGE: A shift by as little as 20 miles in the
system track will drastically alter the location of this
transition zone.

Anyone in this zone should be prepared for up to 12″ of snow,
or as little as 1″ snow, because that is the reality of this
system’s event horizon.***

History suggests that warm air usually progresses much further north than the models predict, but with such a strong shot of frigid air battling the warm gulf moisture in this system, there is reason to believe Pittsburgh will avoid another ripoff and avoid the rain with this storm. Some models, specifically the NAM and ECMWF, have backed up the idea that the rain will stay south of the city, but bring that dreaded rain/snow line within 20-30 miles of downtown. This thin margin for error has meant very wide forecast ranges, with the general idea being 3″ or fewer south of Pittsburgh where the rain is likely, 3-6″ in Pittsburgh and mid-Allegheny County, and 6-12″ north. Given that the county is only about 30 miles tall, a very minor shift in storm track will mean drastic changes in forecast accumulation.

The level of uncertainty still remains for our central region counties for snow storm totals. As this system passes into our area tomorrow and Sunday, the question will be: How far north will that freezing line travel? pic.twitter.com/rNP0m8UoBs

All that to say: this forecast has been very difficult, and it is possible we see more changes tonight and tomorrow morning. As a reminder, PGH Snow Day records the most recent forecast as of the first flakes falling, so if necessary we will update this article if outlets make changes. With such a tight snowfall gradient, it is also important to clarify where the official storm total snowfall measurement is taken. We use NWS Pittsburgh’s official storm total snowfall measurement, which is observed at their office in Moon Township. Since there could be a significant difference in accumulation between downtown and Moon, as some of the forecasts below are predicting, we will be using the forecasts for Moon in our accuracy calculations to correspond to where the measurement is being taken.

Without further ado, here are the forecasts for this weekend from WTAE, KDKA, WPXI, NWS Pittsburgh, AccuWeather, The Weather Channel, Intellicast, PA Weather Action, and Jeff Verszyla’s White Board Weather. Entering this winter, our highest rated forecaster is Intellicast at 88.34% with The Weather Channel right behind at 88.29%. 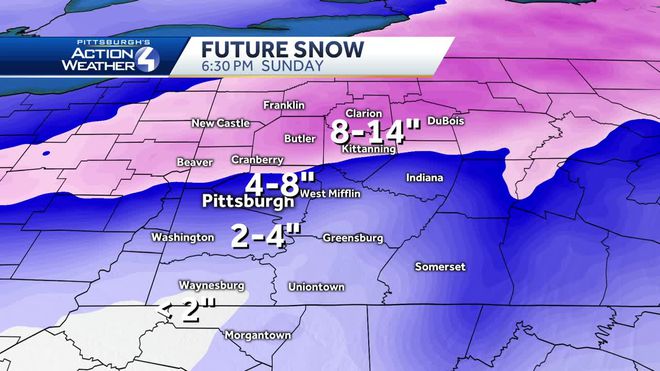 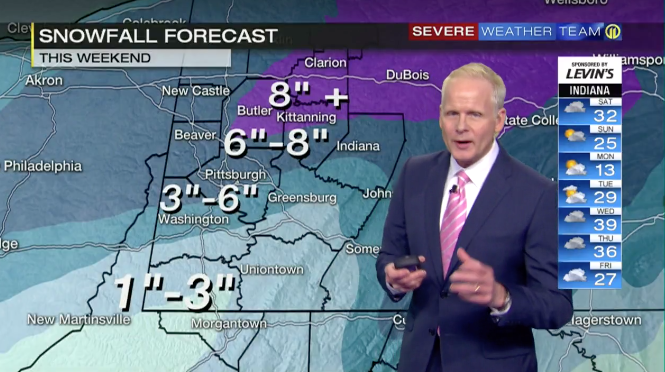 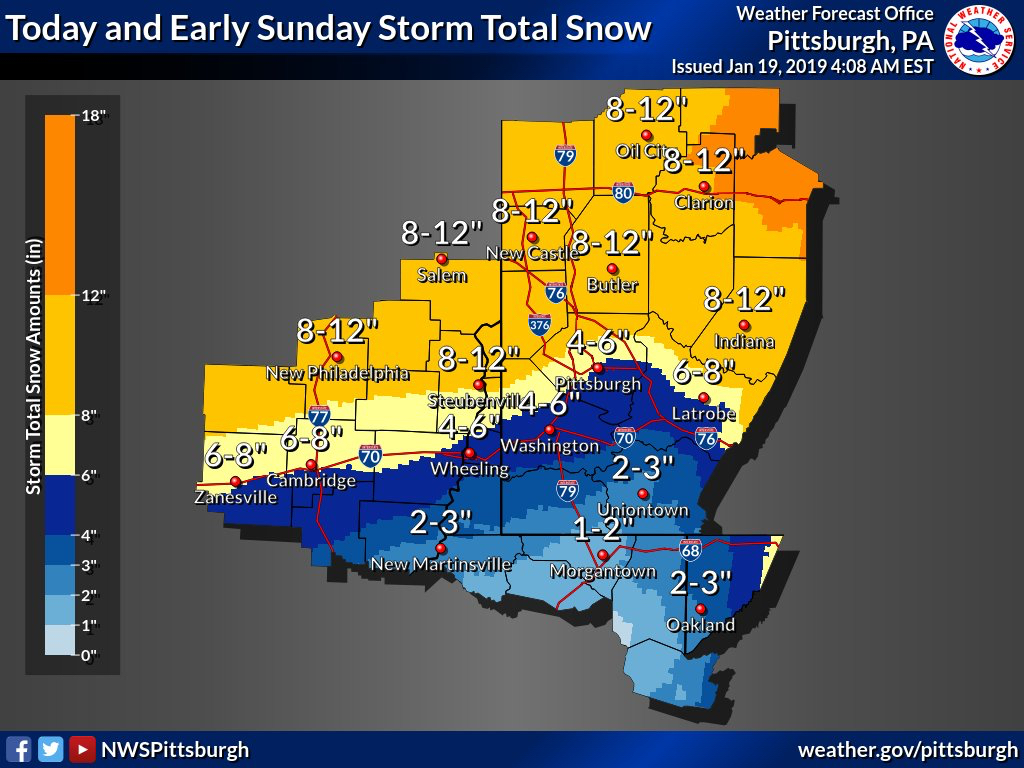 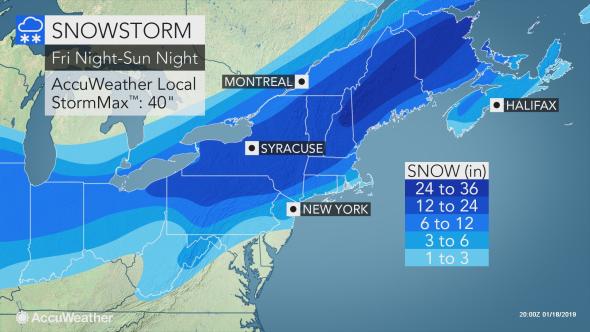 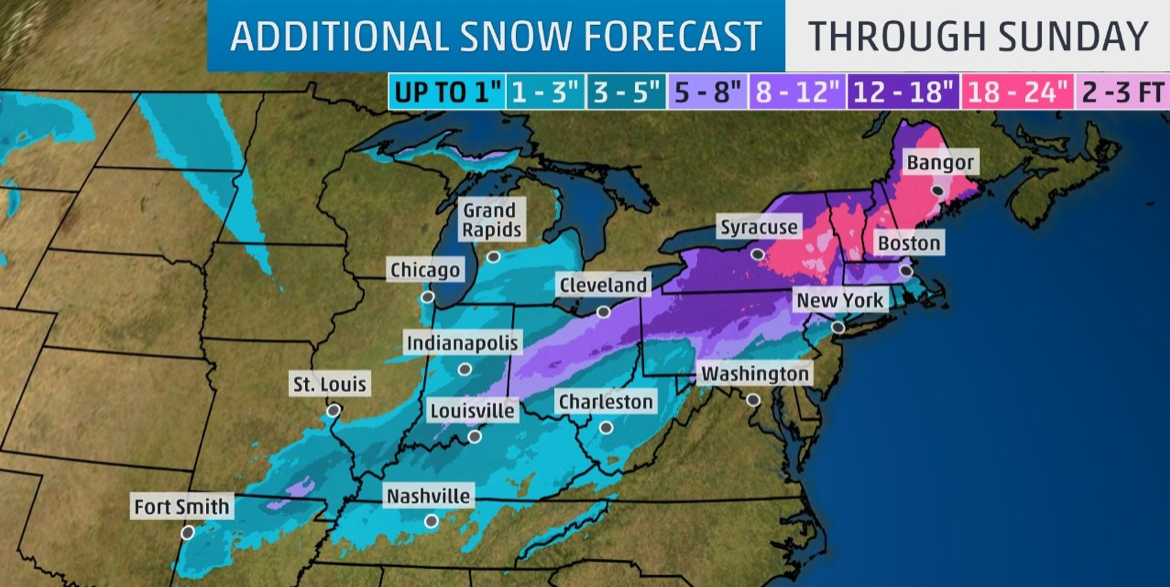 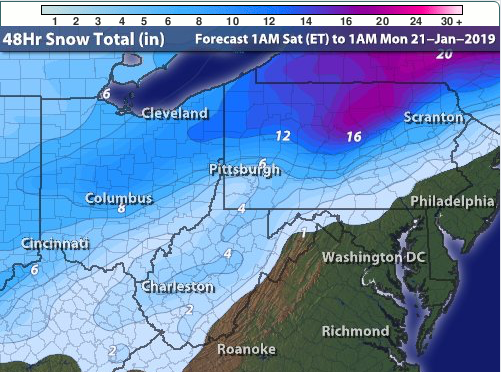 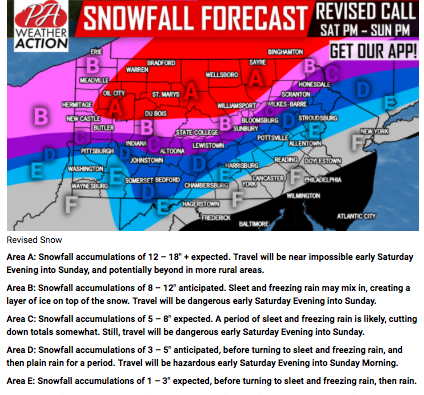 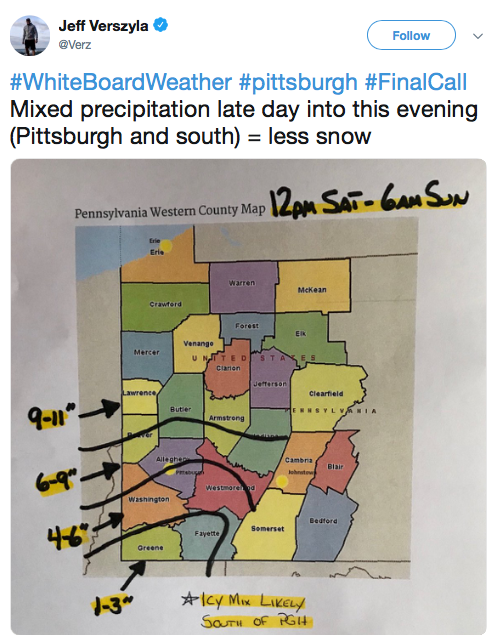