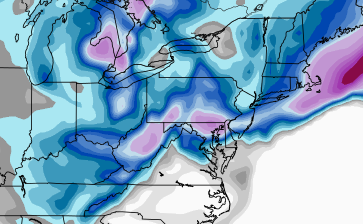 Winter is back for Western Pennsylvania, and once again we have a very complicated storm that makes the forecasts anything but straightforward. With a large hurricane-like system out at sea off the East Coast, an upper low is coming around the bend right over Western PA. Unfortunately for snow lovers, what could have been a significant storm will have lesser accumulations due to warming on the eastern edge. Eventually, the cold air will win the battle and our precipitation will switch to all snow, but when this happens it could be too late for major snows.

Each predicted measurable snow event will have a roundup article like this one posted so that you can view each network’s predictions for the storm. After the last flake has fallen, we will post an article inspecting who had the most (and least) accurate snowfall forecast in our Forecast Analysis. Many of these maps have similar ideas, but if you are looking for a specific one to trust, WTAE has been most accurate so far this winter, with Intellicast not far behind on our Accuracy Score rankings.

Note: These are the most recent maps as of noon on Monday, February 8th. KDKA’s map and WTAE’s FutureCast were added later, but before accumulation began. 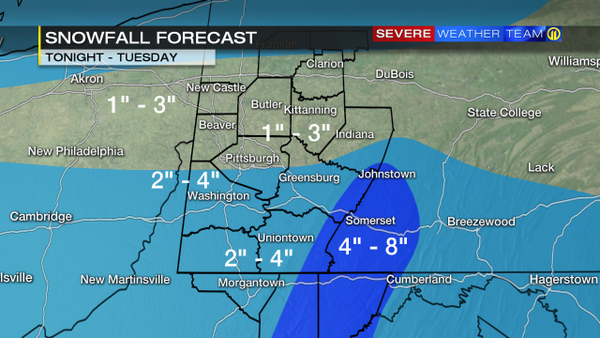 WPXI: Channel 11 is splitting Allegheny County between a 1-3″ range and a 2-4″ range. It is interesting that they are expecting a north to south distribution of accumulation, whereas other networks see the cold as the main factor impacting amounts from east to west. 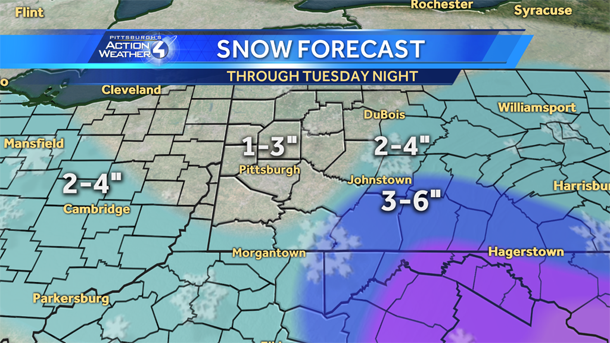 WTAE: Pittsburgh’s Action Weather has in interesting map that includes the dreaded dry spot over Western PA. To the east and west of Allegheny County they expect 2-4″, but only 1-3″ in the city. Their “bullseye” zone of 3-6″+ is in the ridges only. 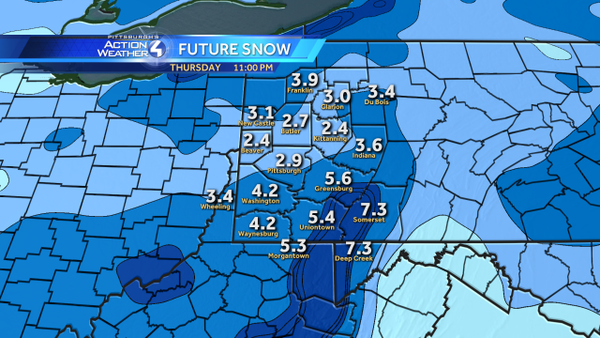 WTAE FutureCast: Once among the most reliable maps, FutureCast has lost some credibility this winter. However, for a banding storm like this, it might give a pretty accurate forecast. 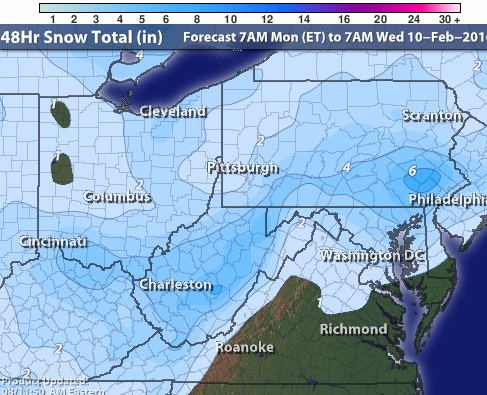 Intellicast: One of our favorite forecast maps, from Intellicast.com, has been conservative with snowfall amounts all week. Their map banks on the rain keeping snow totals low, as they expect just an inch or two in Pittsburgh. In general, their accumulation lines match up pretty well with the map from WTAE. 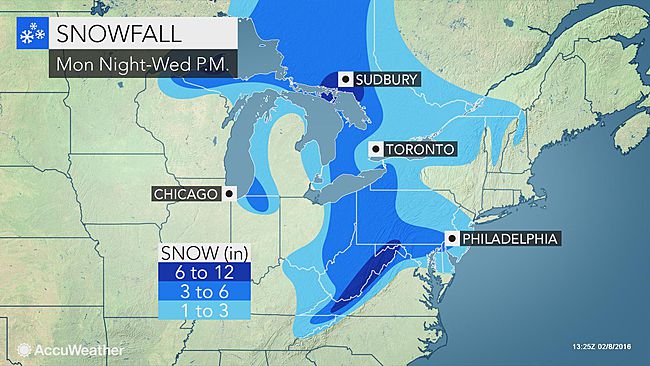 AccuWeather: The digital giant upped their totals this morning, and they now see a huge swath of 3-6″ bearing down on the entire area. 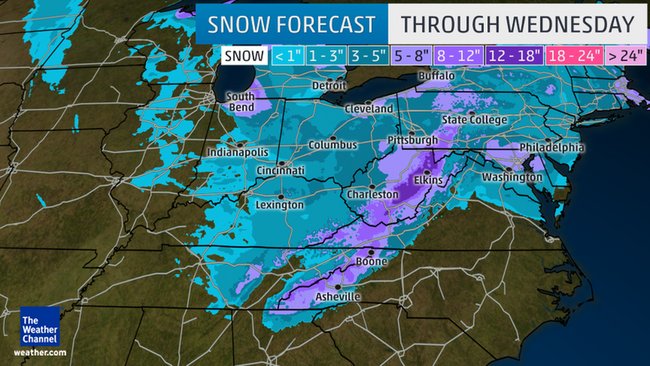 The Weather Channel has been very consistent in expecting 3-5″ for the entire area all weekend. They have overshot and undershot with their predictions this winter, so it will be interesting to see how this consistency works out. 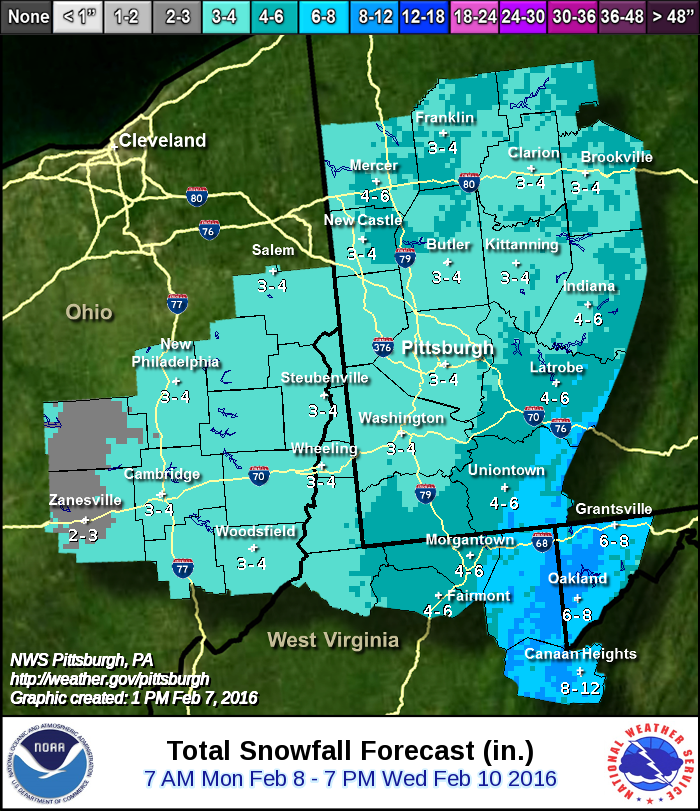 NWS Pittsburgh is following a general east to west change in accumulation, and has Allegheny County completely in 3-4″. 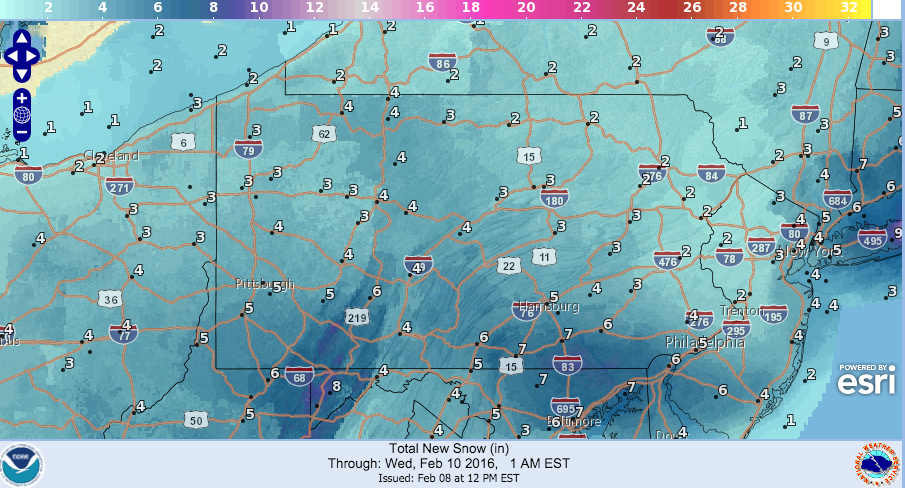 NWS National: Although this model has made huge mistakes that make it hard to trust, it does seem at least possible this time around. Their totals are definitely on the high side of the ranges, but a general 4-5″ over most of the area is certainly possible.

Be the first to comment on "Forecast Maps for Feb. 8-10 snowfall"