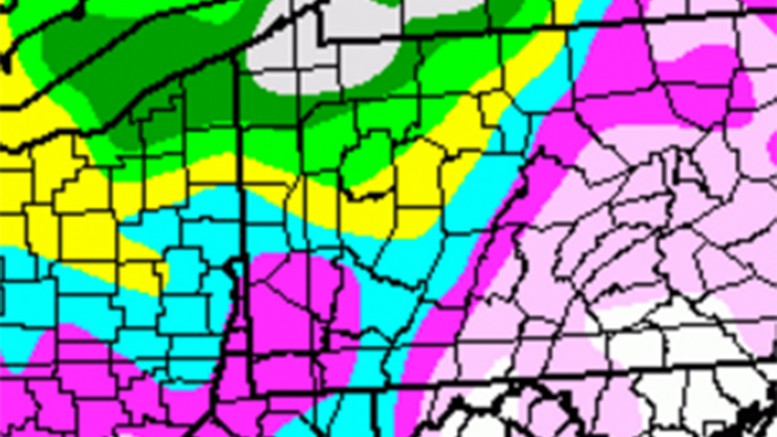 Our best chance of school closings and delays of the season will hit tonight and into Tuesday morning. Snowfall projections are ranging anywhere from a coating to 3 inches, thus there are some discrepancies in the forecasts. Each predicted measurable snow event will have a roundup article like this one posted so that you can view each network’s predictions for the storm. After the last flake has fallen, we will post an article inspecting who had the most (and least) accurate snowfall forecast in our Forecast Analysis. Many of these maps are similar, but if you are looking for a specific one to trust, WPXI was the most accurate for our January 4th snowfall, earning a perfect 10/10 accuracy score. 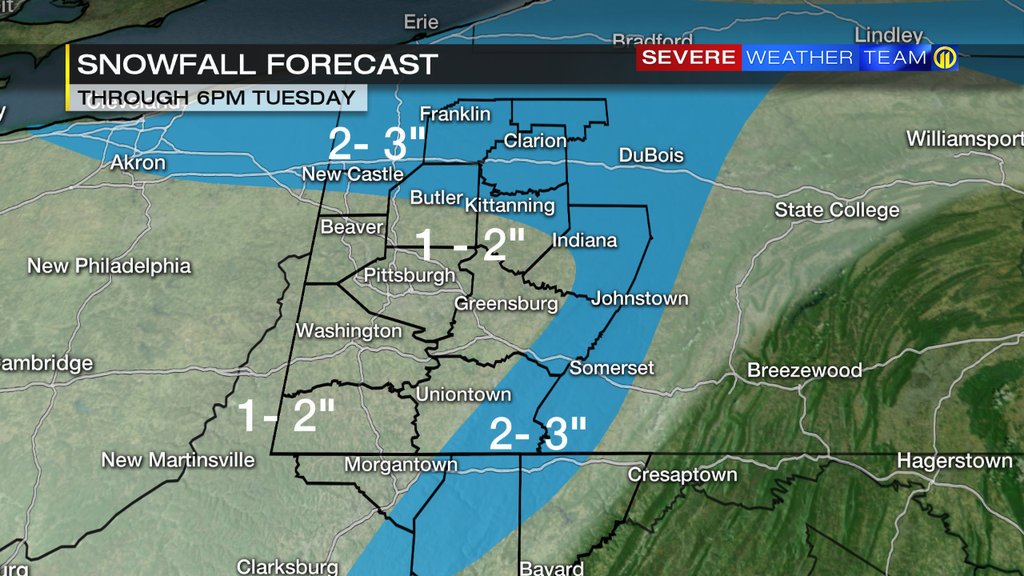 WPXI: Channel 11 is predicting no more than 3″ across the entire area. They also are capping much of southwestern PA at 2″, where many other networks are allowing for up to 3″. 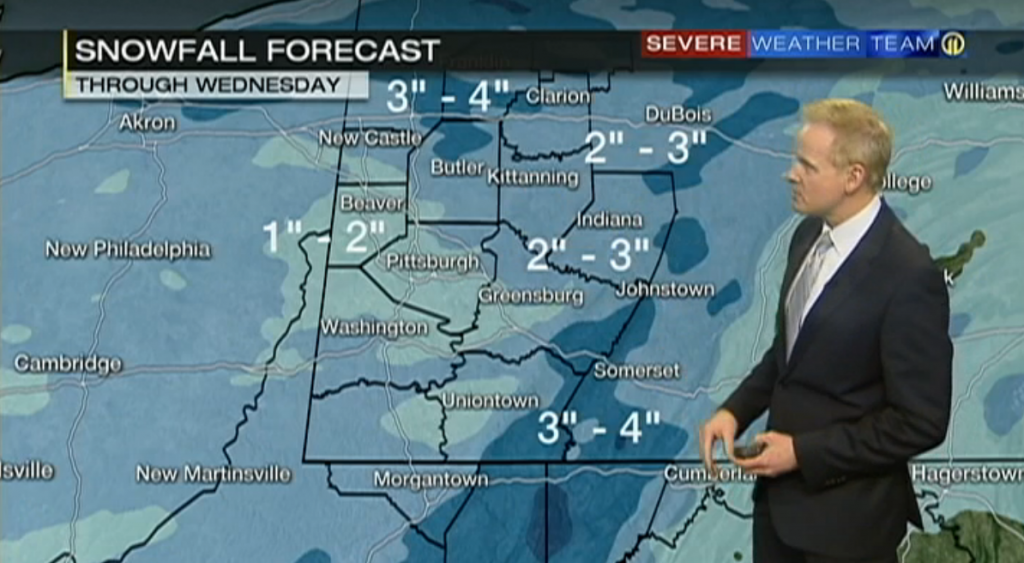 WPXI Futurecast: This map was part of Stephen Cropper’s evening newscast and it is WPXI’s take on the futurecast model, with precise areas of snowfall. Unlike WTAE’s version of this model, WPXI just provides ranges, not specific totals. However, these are smaller ranges than they typically provide, and it has higher totals than their generic snow map. 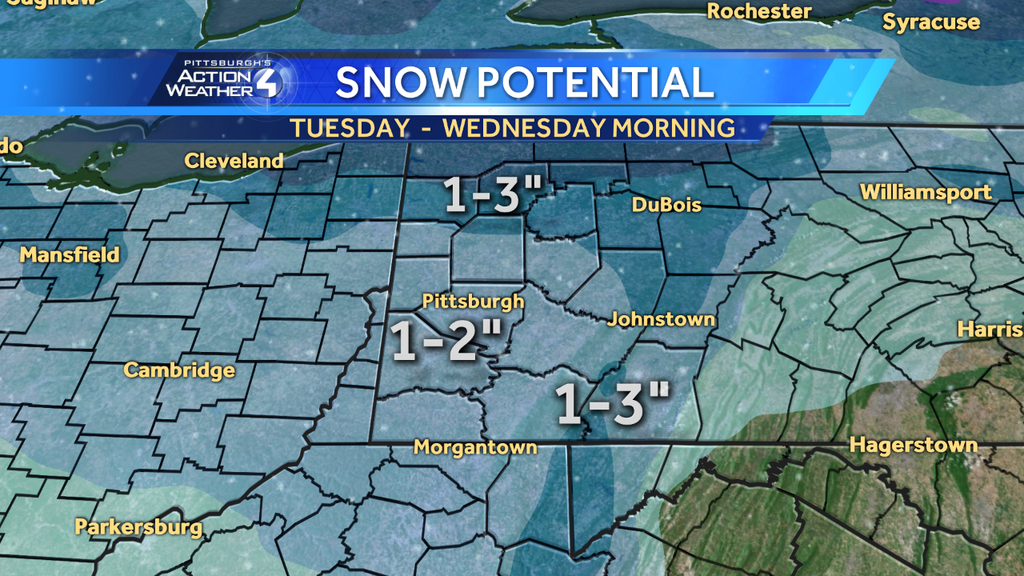 WTAE: Pittsburgh’s Action Weather Team has nearly the exact same distribution of accumulation as WPXI, and has also capped southwestern PA at 2″. The key difference on this map is the range of 1-3″ in the ridges and northern portions of the area. 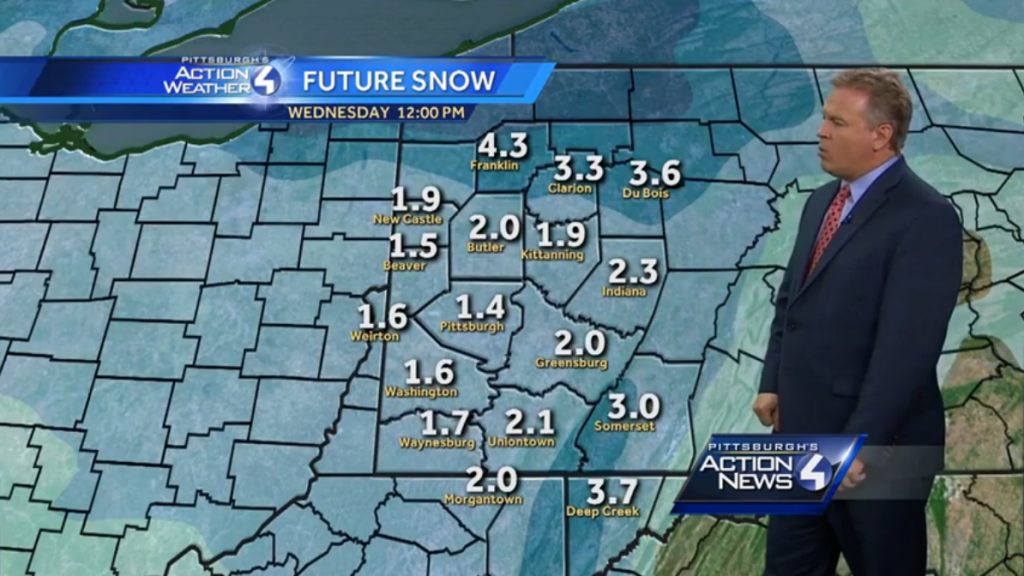 WTAE FutureCast: Historically, this has been one of the most accurate snowfall predictors in Pittsburgh. The FutureCast model from WTAE provides specific snow totals, NOT ranges. On this map for tonight through Wednesday, the computer predicts 1.4″ in Pittsburgh, which is in range of their broader map. It should be noted that last snowfall, WTAE FutureCast called for 0.6″, and we saw exactly that. 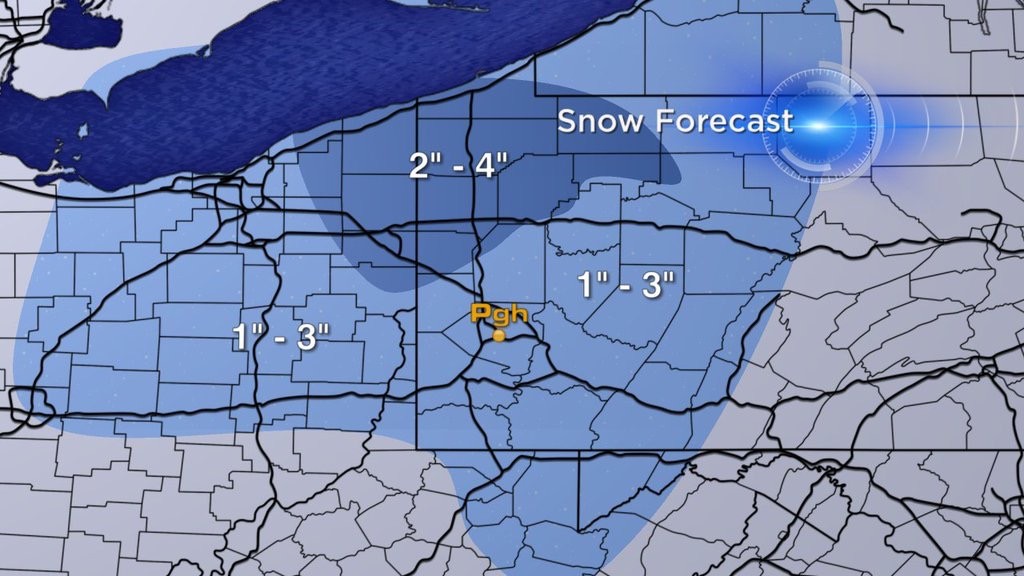 KDKA: CBS Pittsburgh did not post a snow map for the last storm on Jan. 4th, so this will be their first evaluation of the season. Their map follows the same general shape as the other TV stations, but lacks higher accumulation amounts in the Laurel ridges area. A 1-3 inch range covers much of the region, with slightly higher 2-4 inches in northern PA. 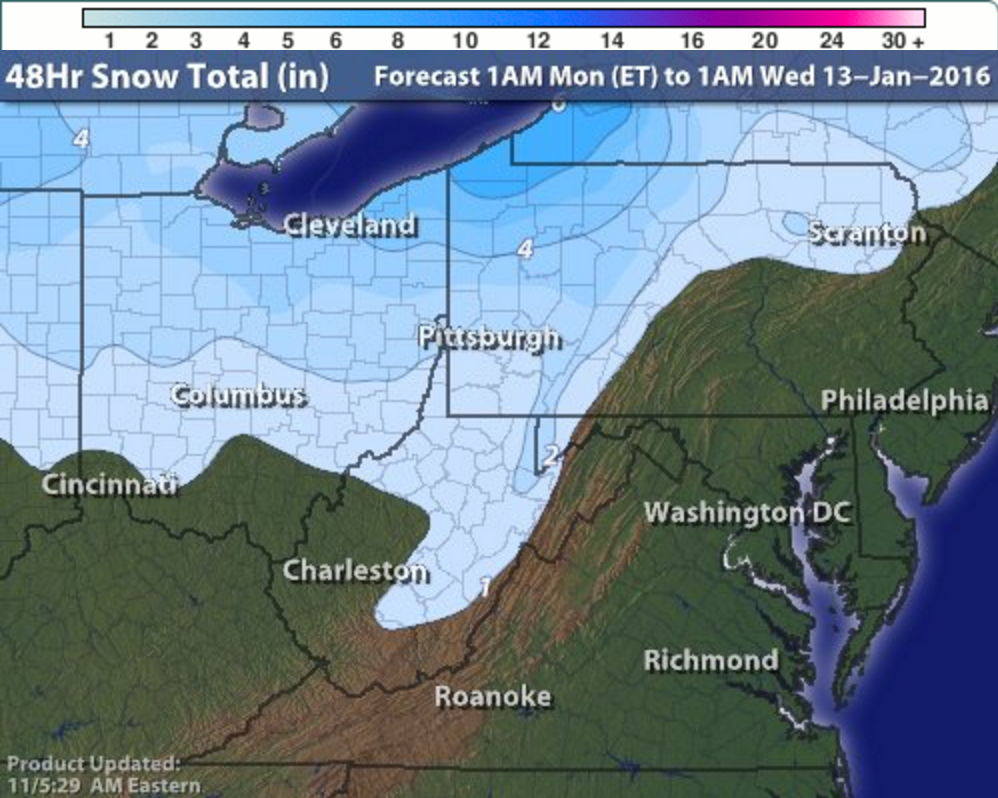 Intellicast: This map is following a true lake-enhanced squall pattern, as the further south you are, the less accumulation you are forecast to see. This map covers the entire area in at least an inch, with the 2″ boundary stretching to the bottom of Allegheny county. Heaver amounts of 3-6 inches are present closer to the lake shore. 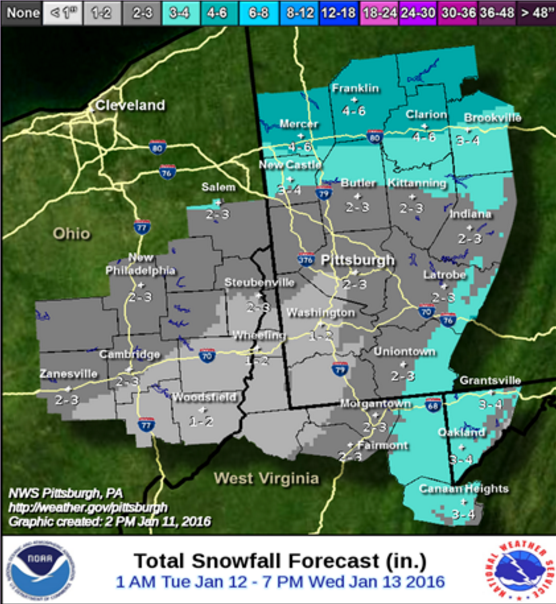 NWS Pittsburgh: As expected, the NWS has updated their forecast map with a greater focus on the southwestern PA areas. Although this map does not include the extreme northern portions of the state, we can see higher accumulation amounts of 4″-6″ visible in Mercer, Clarion, and Franklin on north. The most significant update to this map is that much of Allegheny County has been upgraded for 1-2 inches to 2-3 inches. Also, as expected, there is an area in the Laurel Highlands of higher amounts. 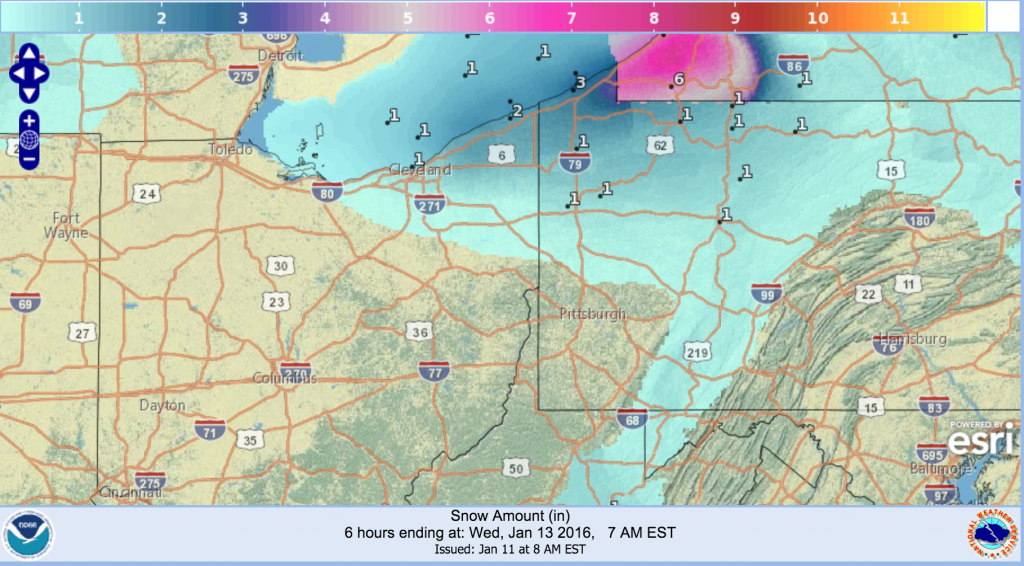 NWS National: The digital.weather.gov interactive forecast map earned an accuracy score of 9 for the last snowfall, so it does have a track record. We hate to judge forecasts before the final flake falls because anything is possible, but this map is so different from the others it is worth pointing out. Where other maps are calling for anywhere from 1-3 inches in the soouthwestern counties, this map thinks it will be less than an inch. This includes all of Allegheny County, meaning any accumulations of an inch or more will be north of the city. This map does include the higher amounts of up to 6″ along the lake. 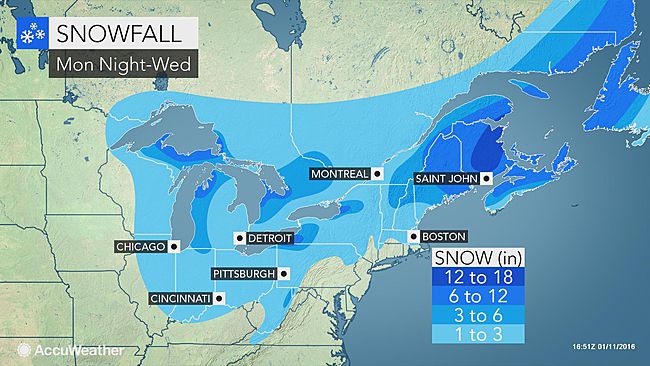 AccuWeather is also predicting higher amounts of up to a foot along the lake. The key differences with their map is nearly the entire area is covered under a general 1-3 inches, with a very small 3-6 inch range in the Laurel Highlands. 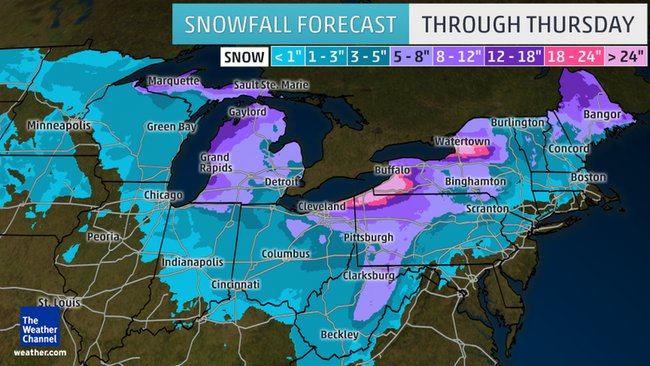 The Weather Channel: This map is borderline insanity. It is so different from every other prediction for this storm that it is fair to question if it is not a mistake. Pittsburgh seems to be in the shades of purple, which means greater than 5″ of snow, but an argument could be made that much of Allegheny County is actually in the 3-5 inch range. In either case, these are the biggest predicted snow totals we have seen for this storm. More interesting than southwestern PA are the areas to the north, where for example Erie is projected to see more than two feet. For comparison, KDKA is calling for no more than 4″ along the lakeshore. We hate to judge any forecast before the snow starts, but this one is just so radical it is fair to doubt it for now. Note: The Weather Channel did not post snow maps for either of the two storms so far this winter, so we cannot judge their 2015-16 accuracy yet.