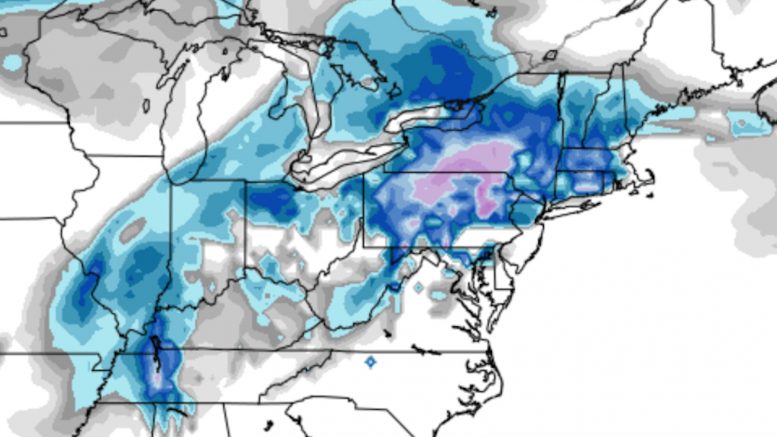 Welcome to PGH Snow Day’s first Forecast Roundup of the 2018-19 winter season. We begin this year with a very complicated system that will bring snow, sleet, freezing rain, and rain to the Pittsburgh area early Thursday morning through late Thursday night. It will be a difficult decision for school officials, as they determine whether the threat of icy roads will be significant enough to cancel school — and we say cancel because a 2 Hour Delay will not make much sense as weather conditions are predicted to worsen throughout the day.

Ultimately, the most important factor in determining snowfall totals will be the amount of mixing, as it often is in Western PA. As AccuWeather meteorologist Bernie Rayno has said repeatedly over the past couple of days in his Periscope forecasts, Pittsburgh is often the battleground between all snow, mixing, and dry air. That dividing line, which so often seems to go directly through the city, has historically busted forecasts with snowfall totals much lower than predicted. We will know around this time tomorrow whether history repeated itself, or if the cold air won out and snow totals exceeded expectations.

Below are forecasts from each of the outlets that we currently track: KDKA, WPXI, WTAE, NWS Pittsburgh, AccuWeather, The Weather Channel, and Intellicast. (Note that we are no longer tracking forecasts from the NWS Digital Model, which we found to be unreliable and lacking proper timestamps.) Over the past three winters, Intellicast has been our most accurate forecaster, just ahead of The Weather Channel (check out our Forecaster Ratings here). We are also including, in table form, the probabilistic forecasts from AccuWeather and NWS Pittsburgh at the bottom of this roundup.

As always, we’ll publish a Forecast Analysis article after the last flake has fallen recapping the storm and grading each of the forecasts we track. 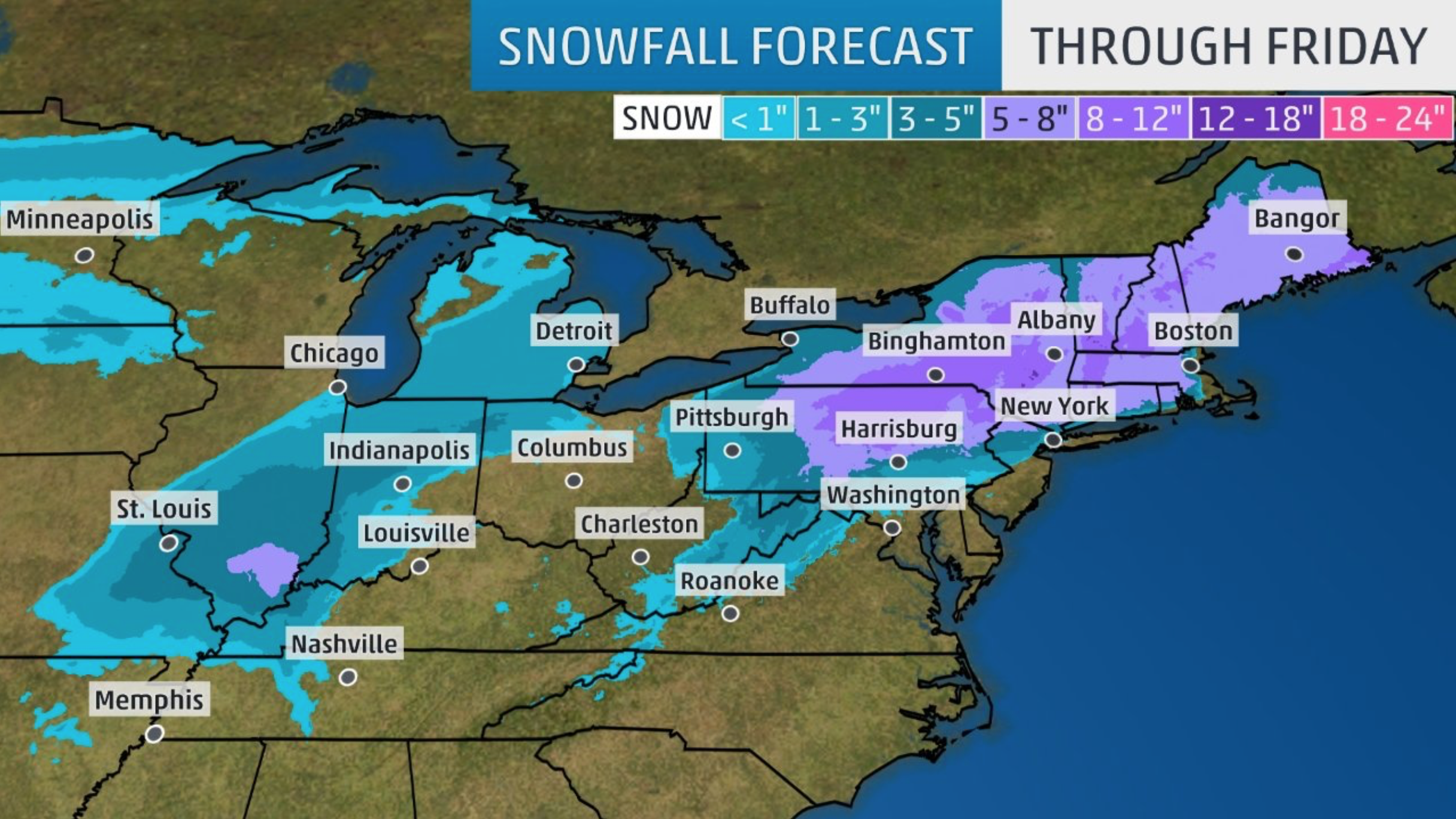 The Weather Channel has made a lot of changes to their snow map over the past couple of days, but as of now they’re forecasting 1-3″ for Pittsburgh. 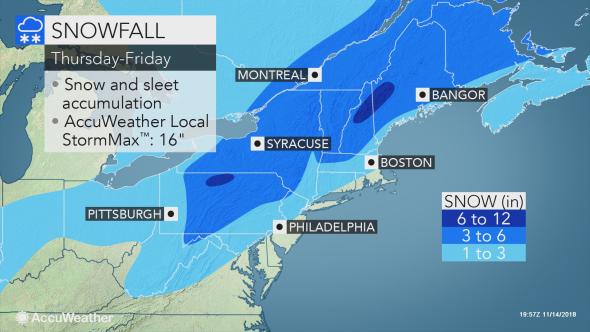 AccuWeather thinks the heavier snow totals will stay to the east of Allegheny County, and predict 1-3″ in Pittsburgh. 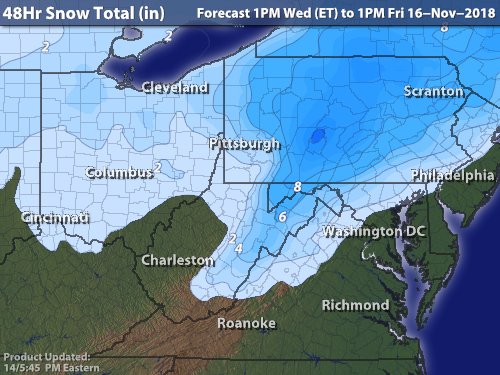 Intellicast has been one of the best forecasters over the past three winters, and for this storm they are predicting 2-5″ for Pittsburgh. 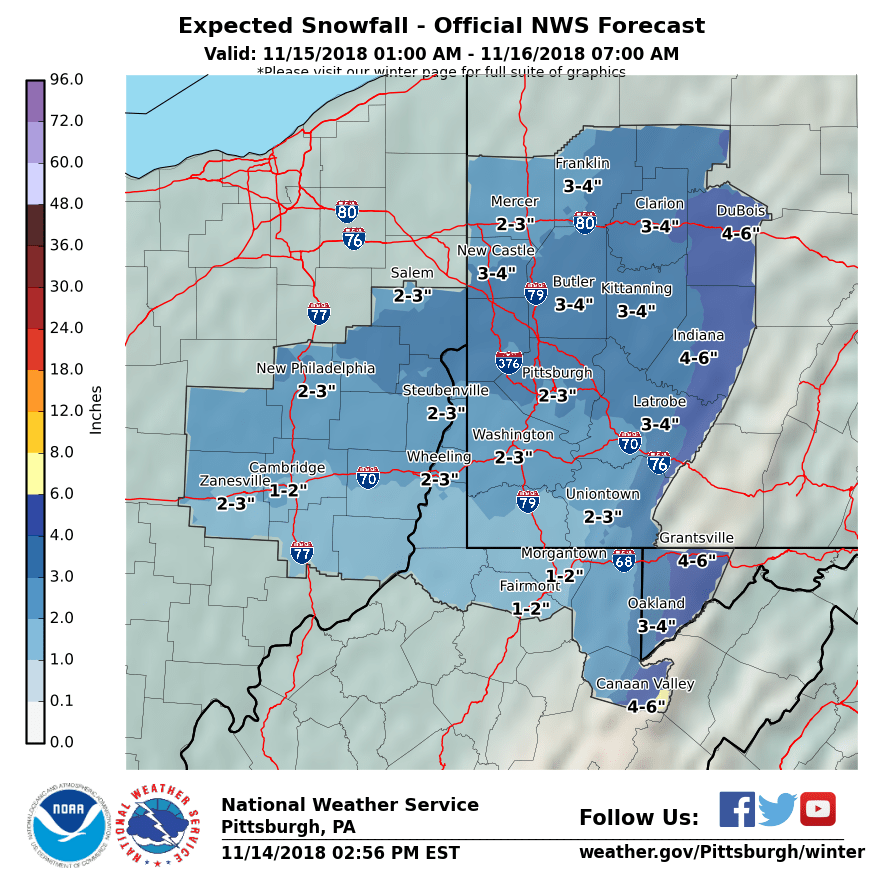 The Pittsburgh office of the National Weather Service is calling for 2-3″ in their range forecast. On their specific point forecast, they call for the high end with 3″. 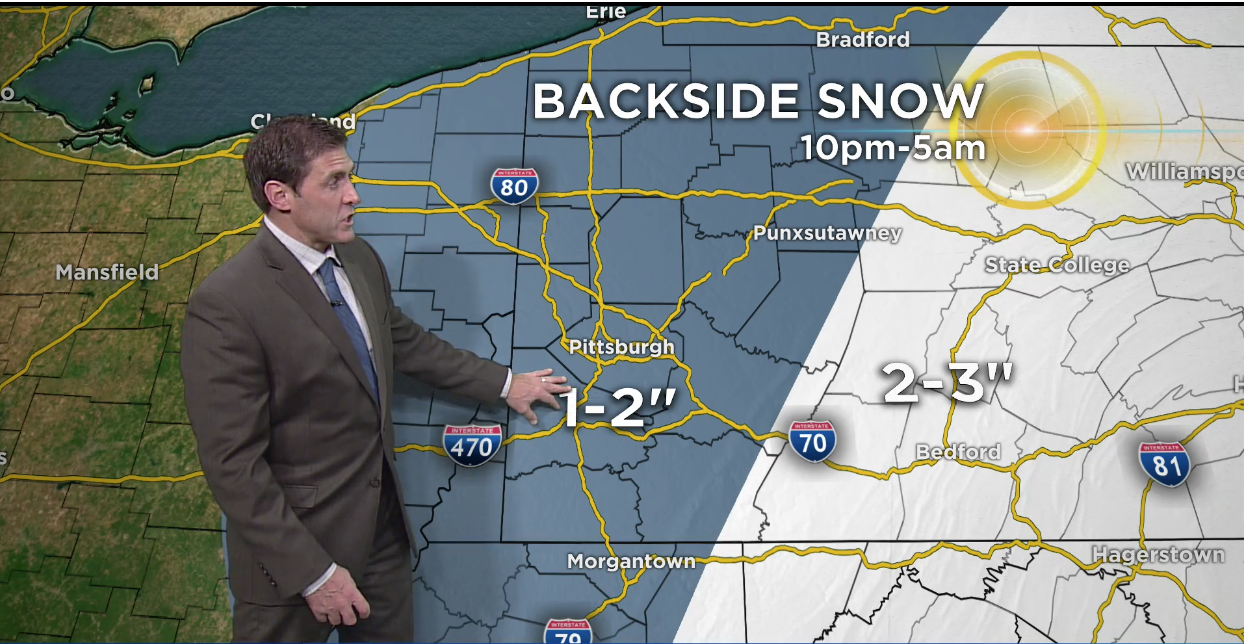 KDKA is forecasting 0.7″ of snow to fall before 1 PM Thursday that will wash away in rain. On the backside, they forecast 1-2″ by Friday morning. 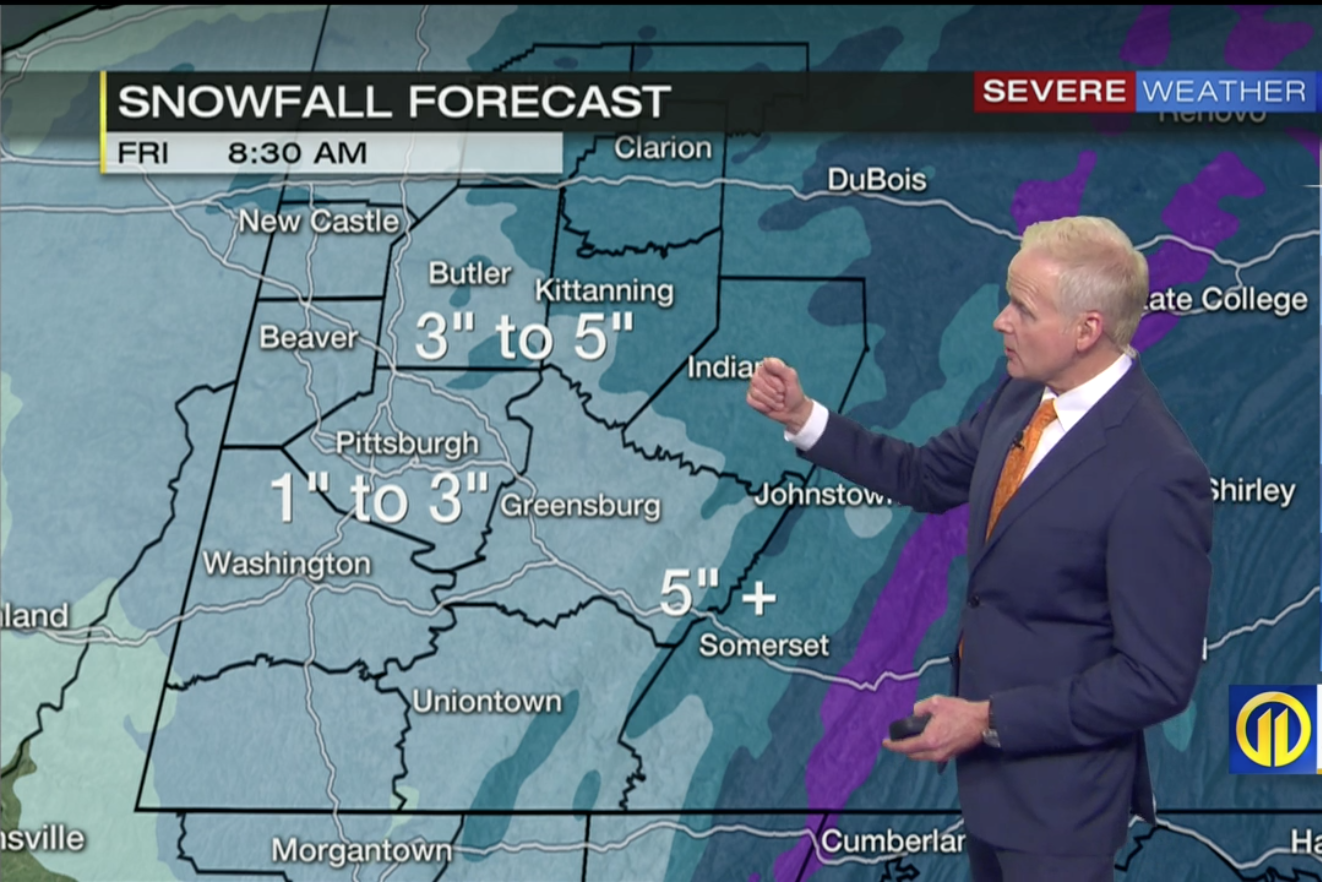 WPXI is calling for 1 to 3″ across Allegheny County 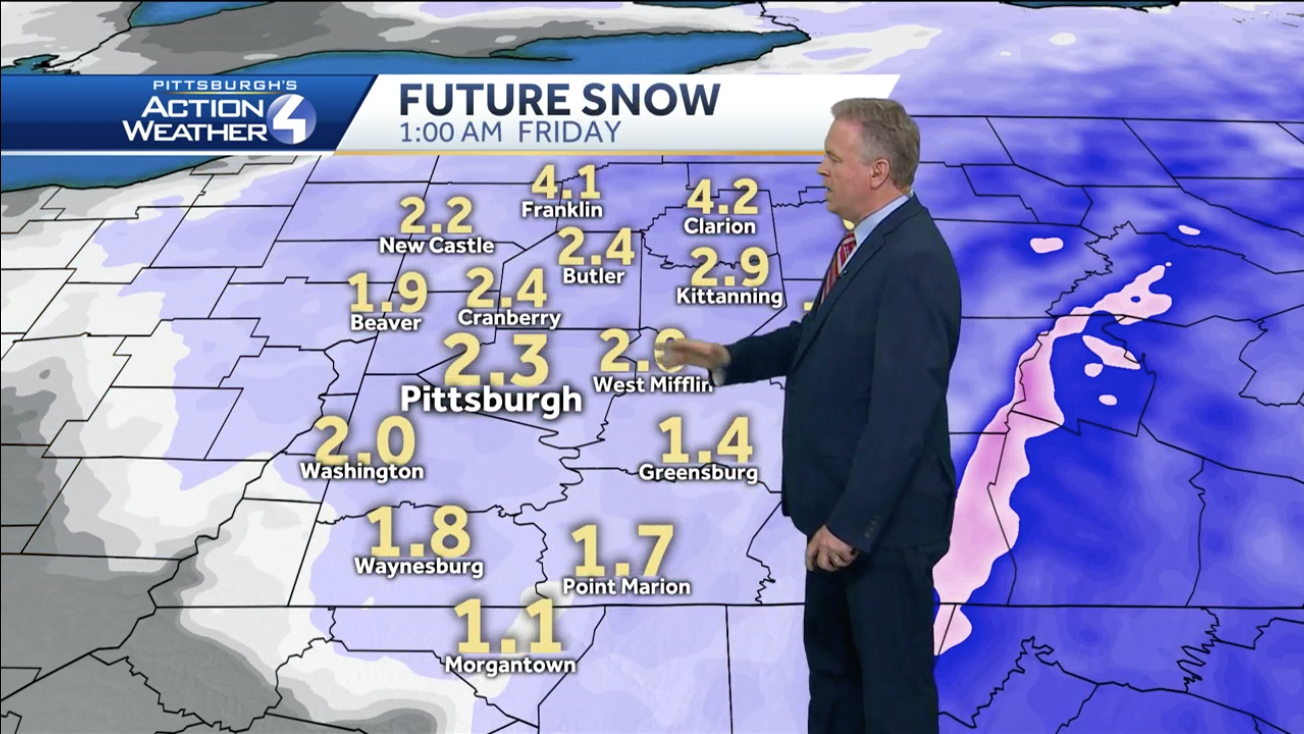 WTAE upped their totals slightly in time for the 11:00 news, and now forecast 2.3″ total by Friday morning.