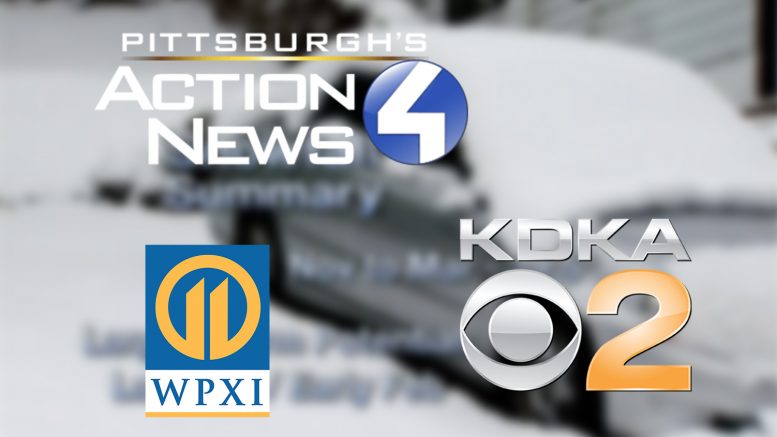 As is tradition in Pittsburgh, Halloween week is marked with not just Kennywood Fright Nights and Trick-or-Treating, but also by the most important weather production of the year for the local news channels. Each year in the waning days of October, WTAE, WPXI, and KDKA all publish their Winter Weather Outlooks. They each forecast an average temperature and a season total snowfall based on long-term modeling and meteorological trends.

Which forecast (if any) of the three should you take seriously? We have collected and analyzed the Winter Weather Outlooks from each network for the past seven winters, comparing each forecast total snowfall with the official total archived by the National Weather Service. Over that period, the three networks have seen similar success, but the best has been WTAE with an error of 27.23 percent. A table of each station’s percent error by year, and a graph of their predictions against the actual season snowfall totals are included below.

As he typically does, KDKA Chief Meteorologist Jeff Verszyla traveled to State College to consult with AccuWeather’s long-range meteorologists for his Winter Weather Forecast. Based on several “macro” weather influences, including El Nino / La Nina, Verszyla predicts meager snowfall in November and December, a bit more in January, and a typical amount in February and March for a season of just under 40 inches of snow. (The average seasonal snowfall for Pittsburgh is 41.4″)

Stephen Cropper is predicting a snowier-than-average winter with a “ramped up snow machine” in January and February. All told, Cropper forecasts 6.5″ more snow than the average of 41.5″ but also expects an earlier Spring with milder temperatures becoming the norm in March. Interestingly, the WPXI outlook is the first to mention climate change as an important factor in Pittsburgh’s winter weather.

Like WPXI, Mike Harvey at WTAE is also calling for an above-average season snowfall total. Harvey predicts a snowy January and February, contributing 31 inches to the season total. Historically, WTAE suggest that the forecasted patterns for this winter are reminiscent of those in the 2002-2003 and 2014-2015 winter seasons, which together averaged 54 inches of snow.