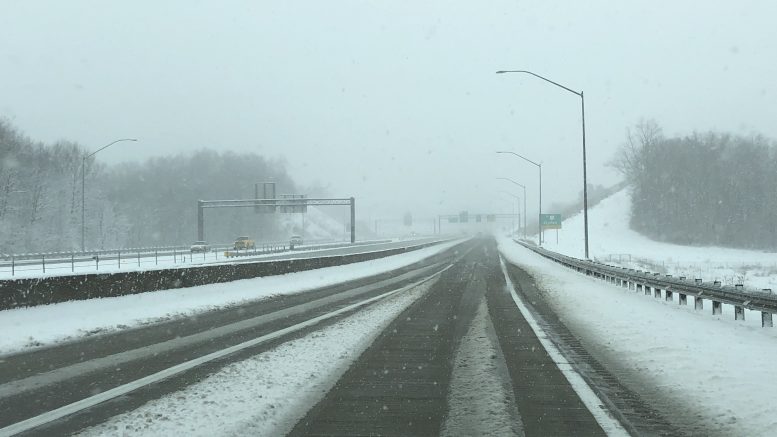 It has been a long winter. Officially, Pittsburgh recorded 59.8″ of snow this season, which is 17.9″ more than the average total. In April alone, 7.3″ of snow fell, which is significantly higher than the 1.5″ we usually accumulate in the transitional month.

With no single season defining snowstorm, this winter will be remembered as a whole; a dreary one with above-average precipitation that seemed to keep the ground white more often than not. These small, nuisance snowfalls made it tricky for us to track the forecasts this year. Typically, snow events have defined start and end times where forecasts can be compared to the actual snowfall observed. However, this year, so many snow events ran together with little to no break in between that is was difficult to perform our usual forecast analysis as often as we would have liked. Still, we were able to gather forecasts to analyze for six snow events: December 12, December 13, January 12, February 7, March 21, and April 2.

Overall, it was a bad winter for forecasters, and by far the worst of the three winters we have tracked so far at PGH Snow Day. (To see the methods we use to analyze forecasts and assign accuracy scores, visit our Forecaster Ratings page.) Of the eight outlets we routinely track (WPXI, WTAE, KDKA, NWS Pittsburgh, AccuWeather, Intellicast, The Weather Channel, and the NWS/NOAA Digital Model) five received seasonal accuracy scores of 80% or lower. The NWS/NOAA Digital Model became the first outlet to receive a D grade for a winter with an accuracy score of 69.33%.

The most interesting observation made from this year’s forecasts is the fact that national outlets such as AccuWeather and The Weather Channel regularly beat local channels KDKA, WTAE, and WPXI with their snowfall forecasts. The three local news stations together averaged an accuracy score of 74.94% while national forecasters AccuWeather, Intellicast, and The Weather Channel together averaged 83.31% accuracy, nearly 10% better than the local mets.

For the third consecutive winter, WTAE produced the best forecasts overall, with their 78.5% accuracy score beating the 76% for WPXI and 70.33% for KDKA. The Pittsburgh office of the National Weather Service in Moon Township matched WTAE with 78.5% accuracy.

The best forecaster this winter was The Weather Channel, which averaged an accuracy score of 84.5%, just a tad better than the 82% recorded by AccuWeather and Intellicast. There is an interesting lesson to be taken away from this: these national forecasts rely more on model data than the local weathermen do. For the March 21 snowstorm especially, models were calling for significantly more snow than the local outlets were.

Since the national forecasts tended to agree with the models, they correctly predicted the double-digit snowfall that we observed, while the local outlets saw their accuracy scores plummet with low forecasts of no more than 6″.  After being burned by models several times in the previous two winters, local outlets seemed to be gun shy of relying on them too heavily this year. Ultimately, that decision hurt their forecasts more than it helped.

The accuracy scores from this winter have been averaged with the scores from the previous two winters, so be sure to check out the brand new Forecaster Ratings.

Thanks for sticking with us all winter, enjoy the warm weather to come; we will be back when the first threat of snow calls in the fall!